Rifi to Raad: Neither you, nor your Armed Party Can Decide who Has Place in Lebanon 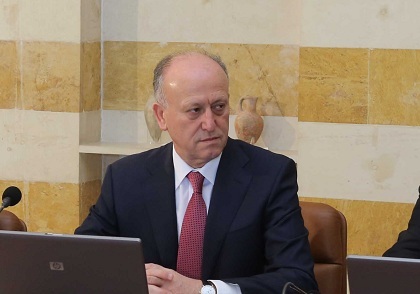 He said via Twitter: “Neither you, nor your armed party can decide who has a place in Lebanon or not.”

“Lebanon belongs to us all,” he stressed.

“You should once again return to being a Lebanese national like the rest,” the minister said.

“You should know that intimidation through the use of arms will not work,” added Rifi.

Raad had waged a blistering attack on Hariri without naming him on Monday, saying “those who are suffering from bankruptcy in their exile must not find a place to return to in Lebanon in order to rob the country once again.”

He also fired at Hariri's presidential initiative that involves nominating MP Suleiman Franjieh for the presidency, noting that “the issue is not about a person whom we would give the presidential post to without him having any powers to rule the country with.”

“All of the powers would be usurped by the person who is entrusted with preserving the interests of this kingdom or that state,” Raad added, referring to Hariri and Saudi Arabia.

The latest remarks come amid a war of words between Hizbullah and al-Mustaqbal linked to the Saudi-Iranian row that was triggered by Riyadh's execution of senior Shiite dissident Sheikh Nimr al-Nimr.

Rifi, the way that Iran, Assad and hizbollah operate is that a car bomb will assisinate you soon and hizbollah will state it's Israel trying to create strife in the country similar to the findings of boutros Harb failed assisinations

Rifi is talking about an armed party, what about the hundreds of militia groups in Tripoli Bab al Tabbaneh etc. That carries arms and heavy weaponry right outside of his house?

What about you stop avoiding my question and answer if it is a martyred iranian jihadi terrorist family in your avatar?

You know very well that those fighting in Tripoli were no militias but locals who were armed to repel the implementation of hizbollah and its Saraya in Tripoli. Now that a deal was reached with hizbollah withdrawing from Tripoli (who only agreed to do so after a campaign of bombing in dahieh in 2014), those armed locals have been dismantled and many are imprisoned in roumieh.

Riffi watch your back from assisination similar to all march14 assisinations executed by hizbollah under the Syrian master order.

Rifi is a terrorist, we all know how he supported Nusra and ISIS in Arsal countryside, giving them supplies and smuggled them into Syria doing the start of their salafi uprising.

Rifi and those opposing HA never acknowledge support for Nusra, they are only accused of doing so by HA brainwashed posters like you.
On the other hand, HA jihadists and supporters have no problem declaring support to a Nusra-like HA, a sectarian militia whose ultimate goal is expanding Iran's influence throughput the region with total disregard to Lebanon and its institution.

They have divided Lebanon and spreading hatred in the name of God...

The ISIS official of Lebanon has spoken, the same one that persecuted Lebanese people that trashed ISIS flags.

If riffi is nusra and terrorist then why roomieh is filled with those who were armed and attacked either leb citizens or army including Assir, meanwhile all Jaafar clan and co. In Baalbek keep killing innocent leb army officers with hizbollah weapons that is only aimed at Israel.

Your leader nasrallah lies to you...he defends nimr that he did not form a militia while himself formed one and continue to interfere In Syrian affairs and Bahrain and Romania and Cyprus.

You are a typical Saudi stooge.

Bravo. Don't mind the speaker of the filthy murdering militia

Min7ayyik ya khawaja riffi ya ibn libnan el asil ,wish all politicians in lebanon would have the courage and stand like you do alla yi7mik ya m3allem riffi,just protect urself from wled el 7aram....