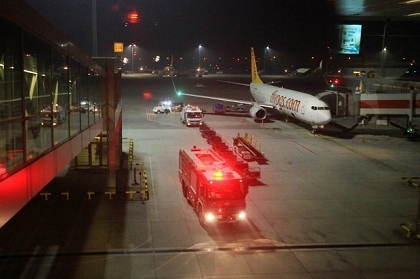 A mortar attack was the cause of a deadly incident on December 23 at Istanbul's Sabiha Gokcen airport that left one person dead and damaged several planes, Turkish prosecutors said on Thursday.

Four mortar shells were fired from a forested area around two kilometers (1.25 miles) from the airport, prosecutors said in a statement carried by the Anatolia news agency.

A Kurdish group calling itself the Freedom Falcons of Kurdistan had claimed the action as revenge for the Turkish army's relentless military campaign in the Kurdish-dominated southeast.

But two weeks after the incident, this was the first official statement confirming an attack.

Airport cleaner Zehra Yamac, 30, died of head wounds while five planes suffered slight damage as a result of shrapnel from an explosion.

"The investigation has revealed that four mortar shells were fired at around 0215 (0015 GMT) from a wooded area about two kilometers from the airport," the statement said.

"Three of the shells landed on the apron landed next to each other while the other landed on a different area," it said, adding that it was "fragments of shrapnel" from the shells that had hit the nearby planes and the cleaning worker.

It said the forested area was still being examined to determine what the specific target was and who was behind the attack.

The Freedom Falcons of Kurdistan (TAK) said in a statement on December 26 that the airport attack was a response to the "fascist attacks that turn Kurdish cities into ruins."

The attack came as Turkey wages an all-out offensive against the Kurdistan Workers' Party (PKK), with military operations backed by curfews ongoing to flush out the rebels from several southeastern urban centers.

Turkish officials say the TAK is a front for PKK attacks on civilian targets, but the PKK claims TAK is a splinter group over which it has no control.

There is not believed to have been any precedent for a mortar attack on an airport in Istanbul.

In a second statement on December 30, the TAK warned that the Sabiha Gokcen attack was just the start of a new wave of assaults.

It said this was revenge for the jail conditions of PKK leader Abdullah Ocalan -- held on the Imrali prison island in the Sea of Marmama -- and military operations in Kurdish cities.

"This is just the beginning of a new war we have launched against the Imrali torture system targeting our leader and the mass killing of the Kurdish people by the fascist dictatorship," it said.

Sabiha Gokcen airport, on the Asian side of Istanbul, is the second international airport in the city after much larger Ataturk airport on the European side.

It is now fully owned by Malaysian Airports Holding which completed the acquisition of the remaining shares in the airport this year.