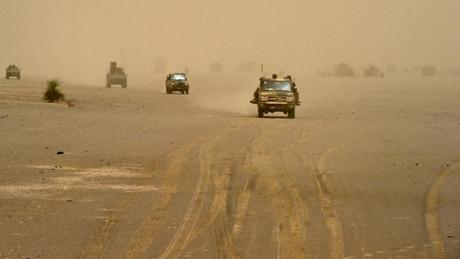 Two soldiers were killed when their patrol was ambushed in northern Mali on Friday, security sources said, a week after the kidnapping of a Swiss national in the same area.

A local military source said two of the assailants were also killed during the exchange, 70 kilometers (43 miles) from the desert caravan city of Timbuktu.

"We quickly fired back at the assailants, whose identity we aren't exactly sure of," the source told AFP. A Malian security source confirmed the deaths and said one of the attackers had been arrested.

On January 8, gunmen abducted Swiss national Beatrice Stockly from her home in Timbuktu in the first such kidnapping of a westerner in northern Mali since the abduction and murder of two French journalists in November 2013.

There was no immediate claim of responsibility but Stockly, who is in her 40s and has lived in Timbuktu for years, had already been kidnapped in April 2012 by Islamist fighters.

At the time, the social worker was said to be the last Westerner living in the fabled trading post, which she refused to leave when it fell to Islamist Ansar Dine rebels on April 1, 2012 in an attack backed by Al-Qaida's north Africa branch, AQIM (Al-Qaida in the Islamic Maghreb).

Around the same time, a loose alliance of Tuareg and Islamist rebels took advantage of the political chaos in Mali's capital that followed a coup, capturing the country's northern desert.

In 2013, the jihadists were chased from the region by a French-led military intervention, with a regional French counterterrorism force still conducting operations in the area.

But entire swathes of Mali's north remain beyond the reach of the Malian army and foreign troops.

In November, 20 people -- 14 of them foreigners -- were killed in an attack on the Radisson Blu hotel in the capital, Bamako, which was claimed by two jihadist groups.