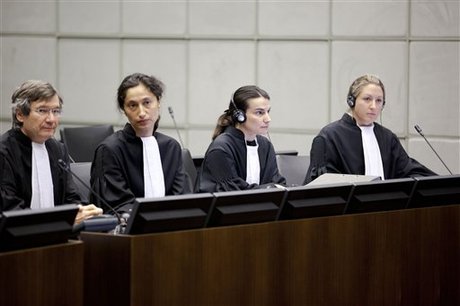 The head of the Special Tribunal for Lebanon Defense Office Francois Roux demanded on Friday that the arrest warrants against the four accused in the assassination of former Prime Minister Rafik Hariri be eliminated.

He said during a hearing at the STL headquarters in The Hague: “The issuance of arrest warrants has led to the accused being unable or unwilling to appear freely here in accordance with the provisions of the STL’s Rules of Evidence and Procedure.”

“We therefore submit that the warrants that have been issued have turned the rights of the accused into theoretical and ineffective rights,” he stressed.

“These warrants make it impossible to notify the accused of the charges being held against them. Should the accused hear of the arrest warrants their only option would be to hide and avoid arrest,” Roux stated.

“This is not the spirit the Rules of Evidence and Procedure was drafted in or the will of late STL President Antonio Cassese,” he said.

“I therefore feel that your trial chamber has the power to make up for these difficulties,” he remarked before the court.

“The pre-trial judge is the only one able to issue an arrest warrant and yet the pre-trial chamber has the only power to initiate in absentia proceedings and in this context, the chamber is also able to lift or repeal the arrest warrants should it be necessary,” Roux said.

He gave the example of cases in the International Criminal Tribunal for the former Yugoslavia during which the trial chamber repealed arrest warrants.

“The defense office consequently submits that the chamber should suspend or lift the arrest warrants issued against the accused in that this prevents them from taking all reasonable measures and it consequently also infringes in their basic rights as stipulated by the STL Rules of Evidence and Procedure,” he stressed.

He added: “We should focus on the purpose or the role of the tribunal. Do we want to try them or arrest these individuals?”

“The present procedure cannot be considered fair in that the accused have not exercised the rights that have been provided in our own statutes,” Roux concluded.

For his part, representative of the Prosecutor’s Office Iain Morley welcomed the possibility of the accused appearing in trial via video link, deeming it a “reasonable step that may be explored.”

Should it be explored, then the pre-trial judge may eliminate the arrest warrants, he stated.

He added that the Defense Office does not have the power to do so as only the Appeals Chamber is entitled to eliminating or suspending arrest warrants.

The court was mulling Friday a possible trial in absentia of four Hizbullah members accused of killing Hariri and 22 others in a massive car bomb explosion in Beirut on February 14, 2005.

The STL is the only international court that has a mandate to try suspects in absentia and if it does, it would be the first such occurrence since the post-WWII Nazi trials at Nuremberg, said Roux.

It is the first international criminal tribunal with jurisdiction over the crime of terrorism with a mandate to try defendants in absentia.

So far however, Beirut has failed to arrest the four men wanted for the assassination.

at least STL some respect for hassoun and el manar TV.
why the hareem are not wearing a hijab or niqab or at least covering something???
thats why mikati will not pay for the......IN LEBANON WE CAN KILL THE PRIME MINISTER IF WE COVER IT.