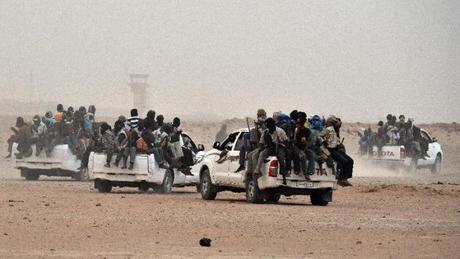 Increasingly targeted by jihadist fighters roaming its remote northern desert, and Nigeria's feared Boko Haram insurgents on its southern flank, Niger fears the emergence of its own brand of home-grown Islamist trouble.

In recent years foreign-funded aid groups and social media have brought ideas peddled by Wahhabism -- an ultraconservative form of Islam -- to more and more of Niger's 19 million people, one of the planet's poorest nations.

The past decade has seen thousands of mosques built and the number of madrassas, or Koranic schools, soar.

Almost every street in poor parts of the capital Niamey has a mosque, with the faithful gathering by the hundreds for prayers. Most women in the west African nation now wear a headscarf.

Niger is 98 percent Muslim, but the vast majority adhere to the Maliki school of Sunni Islam popular across the region that is viewed as more tolerant than Wahhabism -- a fundamentalist school of Islam supported by Saudi Arabia and accused of inspiring the Islamic State group.

Even this month's presidential and parliamentary elections were marked by religion, with campaign rallies invariably opening with the Fatiha, a recital of the opening passage of the Koran widely used before public events.

Boubakar Seydou Traore, imam of the Tchangarai district in northern Niamey and general secretary of the Islamic Association of Niger, welcomed the growing place of religion.

"With the new media, television, Internet, radios, we now have access to more information. This has promoted better practises. Women wearing veils, interrupting university courses at times of prayer, this is the emergence of Islam," Traore said.

"It wasn't like this five years ago," countered Moulaye Hassane an Islamic studies expert at Niamey's Institute of Research into Human Sciences.

But Hassane said Wahhabism is taking hold mainly in the towns, while Maliki Islam prevails in rural areas.

"The (armed radical) Salafist groups in the desert don't have a direct influence. But the danger for Mali, Mauritania and Niger is that a new form of Islam will surface. It's an internal process.

"The day will come when (some) will want an Islamic republic."

The Christian minority once lived peacefully alongside Muslims, but in January 2015 anti-Christian riots in Niamey and southeastern Zinder left 10 dead and 50 churches razed in an unprecedented flare-up of religious violence.

The riots were sparked by the publication of a cartoon of the Prophet Mohamed by French satirical weekly Charlie Hebdo, a week after gunmen killed 12 people in a Paris attack against the paper.

Hassane says religious hardliners got a boost in the 1990s.

"Due to bad governance, the World Bank and the International Monetary Fund imposed regulations that forced the state to slash social spending. NGOs (non-governmental organizations) with Wahhabite ideas arrived with funds from Saudi Arabia, Qatar and elsewhere ... They work in the social sector," he said.

"Students with grants to study in Arab countries too learn Wahhabism. After the elections they'll go into parliament," he added.

Hassane said politicians were ignoring the problem and said "the state needs to come back, the administration needs to be present everywhere."

With a fast-growing population and a world record fertility rate, Niger lacks education facilities, with few girls in class and boys frequently sent to Koranic schools.

Interior Minister Hassoumi Massaoudou meanwhile played down the influence of Wahhabism, saying it "only concerns a small part of the population" and that most hardliners come from Mali, Libya and Nigeria.

He did acknowledge however that "there is a fringe that could become radical"and said the administration was closely monitoring the Islamist issue.

Authorities "watch the mosques and the prayers", Massaoudou said, adding that some preachers have been arrested.

"Wayward politics lay the groundwork for all that. If we fail to establish a democracy, it provides a justification for Islamists who say that democracy is a model imported from the West," he says.

Policies based on tight security are no solution, he said. The regime "wants to eradicate the evil without addressing its causes."