Activists: More than 50 Killed in Syria Violence in 1 Day 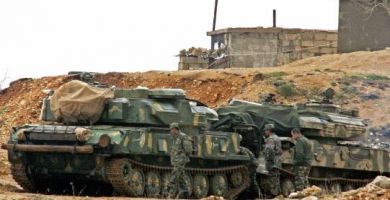 A wave of violence killed at least 50 people in Syria in one day, many of them Syrian soldiers who came under attack from army defectors, activists said Tuesday.

The unrest in Syria appears to be escalating as President Bashar Assad comes under mounting pressure — not only from the West but from his Arab neighbors, as well.

The U.N. estimates the regime's military crackdown on dissent has killed 3,500 people in the past eight months.

The activist coalition called the Local Coordination Committees group identified at least 50 people who were killed on Monday. The British-based Syrian Observatory for Human Rights documented 69 deaths, and said 34 of them are soldiers.

The violence appeared focused in the southern province of Daraa.

It is common to have a discrepancy in figures, because the Syrian government has prevented independent reporting and barred most foreign journalists. Details gathered by activist groups and witnesses are key channels of information.

Assad is facing the most severe isolation of his family's four-decade rule in Syria. On Monday, Jordan's king said Assad should step down for the good of his country, the first Arab leader to publicly make such a call.

Syria's crackdown on an 8-month-old uprising has brought international condemnation, but Damascus generally has been spared broad reproach in the Arab world. That changed Saturday, with a near-unanimous vote by the 22-member Arab League to suspend Syria.

Earlier Monday, Syria struck back at its international critics, branding an Arab League decision to suspend its membership as "shameful and malicious" and accusing other Arabs of conspiring with the West to undermine the regime.

The sharp rebuke suggests Damascus fears the United States and its allies might use the rare Arab consensus to press for tougher sanctions at the United Nations.

Assad says extremists pushing a foreign agenda to destabilize Syria are behind the unrest, not true reform-seekers aiming to open the country's autocratic political system.

But Aoun said that all the trouble in Syria will be over by Tuesday the 15th(today)!!!
His wishful thinking did not help and he is wrong as usual.

But Aoun said that all the trouble in Syria will be over by Tuesday the 15th(today)!!!
His wishful thinking did not help and he is wrong as usual.

Impossible! Michel Aoun promissed us last week it will all be over by today...

Aoun, of course, was wrong. If there was a kiss of death for the Assad Regime, it was that Aoun came over to its side. Anything or any one that Aoun touches turns to kharada. In the case of the Assad Regime, it was there all along, but under a veneer of legitmacy.
Assad and his regime are not legitimate. The father came to power by virtue of a reward for turning the Golan over to Israel in the 1967 War and the truth is that the Israelis have kept the Alawite in power ever since. That the son, Bashar, is still holding on after having murdered more than 10 times the number of Syrians than Gadaffi murdered Libyians is testiment to Israel standing by its investment in peace on its northern border with Syria.

King Abdullah II of Jordan calling for Assad to step down is significant. He has the US, France and the West in this position and the Arab League coming to that position. More importantly, he wouldn't have called for this without Saudi approval.
Isolated? No, Assad has Aoun.