Syrian Exiles Find Fear Rather than Refuge in Lebanon 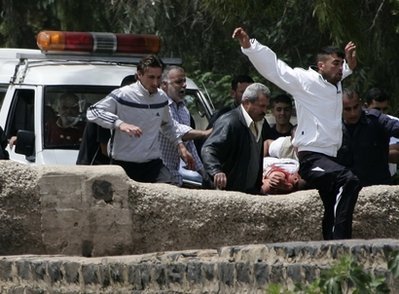 But four months later, he still hides behind a cap and dark sunglasses, nervously glancing over his shoulder every time he leaves his Beirut flat -- fearing Assad's allies in Lebanon will hunt him down.

"I thought that I'd be safe here," explained Saeed, who requested his real name be concealed.

"Unfortunately, we live with the fear that at any moment we could be assaulted or even abducted on the streets of Beirut," the 25-year-old told Agence France Presse. "Syria's leverage in Lebanon has by no means waned."

The plight of dozens of Syrians like Saeed, who fled their country after the Assad regime launched a deadly crackdown on protests, has become a hot issue in Lebanon after reports of several dissidents going missing.

One of the highest profile cases is that of Shebli al-Aysami, 86, who was last seen in Lebanon in May. Lebanon's police chief has said he has evidence implicating the Syrian embassy in Aysami's disappearance.

Three Syrian brothers also went missing in March after one of them was seen in Beirut distributing flyers for a demonstration against the regime in Damascus.

The disappearances have placed Syrian activists on high alert and prompted some to flee to Egypt, Jordan or even further afield to the United States.

"The general rule is that we never stay in the same flat for more than one month and we avoid looking at or talking to the neighbors," Saeed explained.

He and his peers change phone numbers regularly, speaking in French or English when they can to disguise their Syrian accents in Arabic.

They also prefer to meet journalists in cafes on streets they consider "safe" -- those not frequented by supporters of an alliance led by the Syrian- and Iranian-backed Hizbullah.

The party has dismissed reports of abductions of Syrian activists.

Prime Minister Najib Miqati has for his part acknowledged that kidnappings have taken place in Lebanon but has yet to act, despite mounting pressure from the Lebanese opposition.

Meanwhile, Syrian dissidents say they are left to fend for themselves.

"We continue to receive threats regularly ... from parties loyal to the Syrian regime," said Omar Edelbi, spokesman for the Local Coordination Committees, a Syrian activist network.

A poet and longtime critic of Assad, Edelbi said he had long dreamt of coming to Lebanon, considered a bastion of free speech in the Arab world.

But since his arrival in March, the month the revolt broke out, he has not left his flat. "Our life here has turned into one of pressure and persecution," Edelbi said.

Lebanon's opposition, led by ex-premier Saad Hariri, accuses Syria and its allies of tracking down activists using methods that hark back to the dark days when Damascus held unparalleled sway over its smaller neighbor.

But the fate of thousands of Lebanese citizens who disappeared during the Assad dynasty's military rule over Lebanon remains a mystery. Rights groups believe they were either killed or are being held in Syrian prisons.

"My decision is now to go back home, despite the fact that I am wanted by security forces there," said 22-year-old Omar al-Shami, also requesting that his real name be concealed.

"If there is no more freedom here than there is in Syria, why stay here?" said Shami, who was detained and tortured for 10 days for involvement in the anti-Assad movement.

"We lived with the same fear in Beirut as we did in Damascus, especially after all the stories about dissidents being kidnapped began emerging," Ahmed told AFP. "I think Egypt today has become safer than Lebanon or Syria."

His brother Mohammed added: "How does it make any sense that you could be walking down Hamra Street in (central) Beirut and then wind up in the clutches of Syrian intelligence?"

Surely because those who are now pretending to care for them are the same people who since 2005 and until a few months ago have been pursuing the Syrian workers in Lebanon, harassing them, abusing them and in many instances even killing them. How caring!