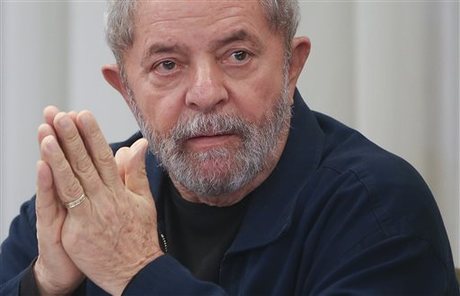 Agents searched Lula's house in Sao Paulo, the offices of the Lula Institute, and houses of family members and associates, said Jose Chrispiniano, a spokesman for Lula and his institute.

As agents, backed by armed officers in camouflage, went through Lula's house, supporters and opponents demonstrated in the street, shouting and scuffling, AFP journalists said.

Prosecutors said Lula was targeted as part of the Operation Car Wash investigation into an embezzlement and bribery conspiracy centered on Petrobras. The corruption scandal, which has already seen a Who's Who of Brazilian politicians and businessmen face charges, is believed to be the biggest ever in Brazil.

Officials said about 200 federal police and 30 auditors fanned out across three states, serving 33 warrants for search and seizure and 11 for detention for questioning.

Lula was not arrested, but was held for questioning over alleged "favors" received from corrupt construction companies implicated in the Petrobras kickbacks scheme, prosecutors said. The police interview, held at an airport near his home, lasted more than three hours, Globo news site reported.

Lula, who was president from 2003-2010, remains one of Brazil's most influential figures and his fate is closely linked to that of his successor, President Dilma Rousseff, and the future of the ruling Workers' Party.

The dramatic raising of the stakes in the long-running Car Wash saga could have repercussions on Brazil's highly polarized political scene, where Rousseff is struggling with economic recession and attempts to impeach her.

Chrispiniano called the search, in which agents were backed by armed officers, "arbitrary, illegal and unjustified."

"The violence carried out today against the ex-president Lula and his family... is an assault against the rule of law that impacts all of Brazilian society," he said.

The allegations against Lula center on a luxury seaside apartment and country house that authorities say appear to have been given to the ex-president as bribes.

"There is evidence that former President Lula received assets arising from the Petrobras scheme through the allocation and renovation of a triplex apartment and a site in Atibaia (as well as) luxury furniture," prosecutors said in their statement.

Lula denies ownership of the apartment and any involvement in the Petrobras scheme.

Prosecutors, however, said that beyond the immediate issue of the properties, they were examining Lula's wider role in the alleged Petrobras-related web of corruption enveloping the Workers' Party, the Lula Institute and also campaign finances.

"Former president Lula, beyond being party leader, was ultimately responsible for who would be the directors at Petrobras and was one of the main beneficiaries of the crimes," the statement said.

Lula was accused of receiving about 30 million reais (approximately $8 million) in donations and speaking fees.

"The favors to Lula from big construction companies involved in the fraud at Petrobras were many and hard to quantify," prosecutor Carlos Fernando dos Santos Lima told a press conference.

Acknowledging the extraordinary nature of a once hugely popular president being detained, prosecutors said in their statement: "It is not a value judgment about who he is... but an investigative judgment based on facts and certain acts which are under suspicion."

"In a republic, even famous and powerful people must come under judicial scrutiny when there is a well-founded suspicion of criminal activity."

But Lula's spokesman said prosecutors had gone too far.

"It's not Lula's credibility, but that of Operation Car Wash which has been compromised, when its leaders turn on a political figure on the most flimsy of pretexts," Chrispiniano said.

The news came a day after a bombshell claim by a Brazilian magazine that a former close ally of Lula and Rousseff -- a senior Workers' Party senator who has already been charged in the Car Wash probe -- was preparing to testify against them.

Senator Delcidio do Amaral, who was arrested last November, was reportedly negotiating a plea bargain deal with prosecutors in which he would testify that Rousseff obstructed the Petrobras probe and that Lula had also been involved in the scheme.

The report, although unconfirmed, sparked a furious reaction from Rousseff's government.

No allegations have been made officially against Rousseff in the Petrobras scandal.

But the former leftist guerrilla, who has become deeply unpopular as Brazil sinks into ever deeper recession, faces an impeachment drive in Congress over her alleged breaking of fiscal rules. She also is being investigated for alleged campaign finance irregularities in the electoral court.

Lula's difficulties are likely to fuel opposition to Rousseff, with large crowds expected to take to the streets in a day of nationwide protests on March 13.