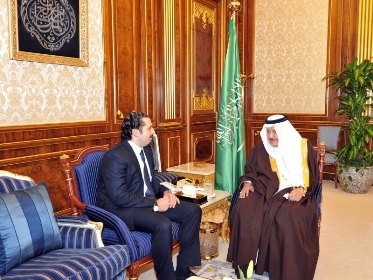 During the talks at the Royal Court in Al-Yamamah Palace, Hariri congratulated Prince Nayef on the success of the hajj pilgrimage season this year and the facilities provided by the kingdom to nearly three million Muslim pilgrims, the office added.

Hariri, who has been absent from the country for nearly eight months, has chosen Twitter as a comeback tool to reach out to followers and take on his rivals Syria and Hizbullah.

The ex-premier, who left Lebanon in April after Hizbullah and its allies toppled his government, popped up on Twitter earlier this month, creating an instant buzz and attracting some 30,000 followers so far.

"Well it's about time to make this more up close and personal," Hariri tweeted on November 3. "You (will) be hearing from me more often and I'll be around as much as I can."

Since then, he has devoted more than an hour every evening to respond to questions about politics, food, movies or sports, much to the delight of his constituents but also to jabs by detractors.

Responding to a question on the revolt in Syria, Hariri at the weekend said he thought it best if the regime of President Bashar al-Assad, which is battling an eight-month revolt, collapsed.

"I think it will be the best thing for the region," he tweeted.

Hizbullah and its allies forced the collapse of Hariri's government in January after he refused to cut ties with the Netherlands-based Special Tribunal for Lebanon probing his father's murder.

Hariri has since lived between Saudi Arabia and France, giving no clear explanation for his absence, which has been attributed to security concerns but also to major financial troubles.