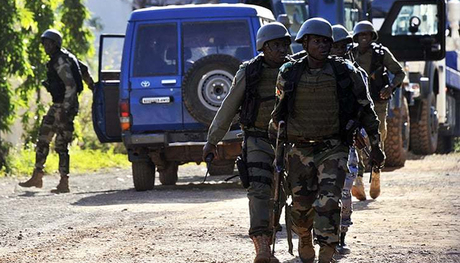 Security forces in Mali said Tuesday they were hunting a fugitive gunman wounded in a failed attack on the headquarters of the European Union's military training mission in the capital.

"We are looking for a wounded terrorist, who ran off," a Malian security source told AFP, adding that one of two suspects arrested following Monday's attempted attack was a person "of interest" to the ongoing investigation.

An unknown number of gunmen attempted to force their way into the Azalai Nord-Sud hotel, where the EU mission is based, in Bamako's upmarket ACI 2000 neighborhood on Monday night, but were held back by return fire from security guards, with one attacker shot dead.

The establishment is in the same district as the Radisson Blu hotel where 20 people were killed by Al-Qaida-linked extremists in November.

"In his bag we found grenades and other evidence that clearly indicates he was a terrorist," including several documents, the source said.

No EU personnel were harmed in the attempted attack, the European Union Training Mission in Mali (EUTM) confirmed in social media postings.

Police showed AFP a photo they said was of the dead gunman, who was pictured shaven headed and wearing blue jeans, slumped in a pool of his own blood.

The number of would-be attackers remains disputed, with as many as four and as few as two given by different authorities, and there has not yet been any claim of responsibility.

Security was stepped up across Bamako on Tuesday, notably in the district where Mali's government ministries are located, with those lacking the correct identification turned away from work.

Speaking while on a visit to Namibia, President Ibrahim Boubacar Keita told journalists the latest attempt to bring terror to Bamako's streets would not derail attempts to return peace to Mali.

"Terrorism will not scare us. It will not alter our way of life. It will not change in any shape or form the way we lead our country," Keita said.

The EU training mission aims to reinforce the Malian army's ability to engage in combat operations as they battle a jihadist insurgency and rampant banditry across vast swathes of the desert nation.

Since being chased from northern Mali by French-led forces in 2013, extremist groups have staged sporadic attacks on the country's military forces and the UN peacekeeping mission based in the country, killing dozens.

More recently they have turned to more spectacular civilian targets, with Al-Qaida in the Islamic Maghreb (AQIM) claiming responsibility for three recent attacks in west Africa.