Syria Regime Forces Advance on IS Town near Palmyra 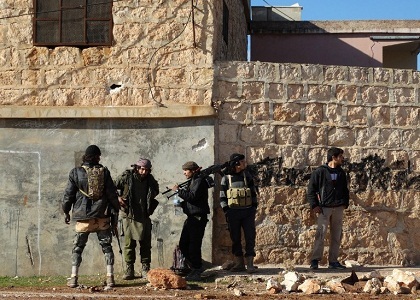 Syrian regime forces were locked in fierce clashes with Islamic State group jihadists on Tuesday on the outskirts of a key town near the ancient city of Palmyra, a monitor said.

Just two days after seizing Palmyra from IS, pro-government fighters advanced southwest towards the jihadist-held town of Al-Qaryatain.

They seized a series of hilltops overlooking the town during the night and battled IS militants into the afternoon, according to the Syrian Observatory for Human Rights.

The Britain-based monitor said the troops were backed by both Syrian and Russian air raids.

IS seized Al-Qaryatain in August 2015, kidnapping at least 230 people, including dozens of Christians, and razing its famed Mar Elian monastery.

The town lies on a key road linking Palmyra with the Qalamun region of Damascus province to the west.

Government forces overran Palmyra on Sunday and vowed to use the city as a launchpad for military operations against other IS-held towns in the area.

A military source told Agence France Presse on Monday that Al-Qaryatain was "the next goal for the Syrian army" as it consolidated its control around Palmyra.

In September, Moscow deployed its air force to back fighters loyal to President Bashar Assad. It has drawn down its forces in recent weeks but has vowed to keep striking "terrorist groups" like IS.