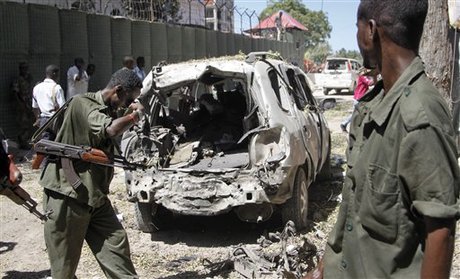 At least three people were killed and six others wounded in a blast at a busy livestock market in Somalia on Wednesday, a security officer said.

The blast, the latest in a string of attacks in the war-torn Horn of Africa nation, took place in the busy Afgoye district, some 30 kilometers (20 miles) south of the capital Mogadishu.

"Three people died in the blast and six others wounded from what seems to have been a grenade," said local security official Abdukadir Mohamed.

The explosion took place while the market was crowded with traders and farmers selling and buying animals.

"There was chaos, people were running for shelter, several bodies were strewn around - including two soldiers," said Ahmed Gure, a local resident.

No group has so far claimed the attack but the Al-Qaida linked Shebab, which is fighting to overthrow the internationally backed government frequently sets off bombs.