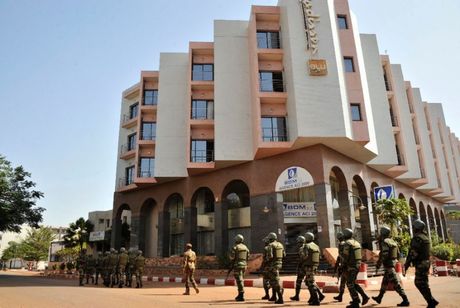 A Mauritanian man suspected of planning and carrying out several recent deadly attacks on popular tourist venues in Mali has been arrested in the Malian capital Bamako, security sources told AFP Friday.

The suspect is believed to have been involved in several recent attacks, including two in March and November last year that were claimed by jihadists and left more than 20 people dead.

Arrested on Thursday in a Bamako suburb, he was also thought to be plotting a fresh attack in the capital which was to have taken place this weekend.

"He was planning to stage an attack on western targets this weekend in Bamako," said a source who asked not to be identified.

He is suspected of attacking a bar and restaurant in Bamako in March 2015 in which five people died, including two foreigners, the sources said.

He is also accused of planning two other deadly assaults -- one targeting the Byblos hotel in central Mali in August, in which 13 people died, and another on the upmarket Radisson Blu hotel in Bamako in November that killed 20 dead.

Mali belongs to the Sahel Group of Five along with Burkina Faso, Mauritania, Niger and Chad, countries where several jihadist groups are active, notably Al-Qaida in the Islamic Maghreb (AQIM).

A security source close to the investigation said the Mauritanian had also been involved in a failed March 21 attack on the Azalai Nord-Sud hotel in Bamako, where the EU military training mission is based.

Code-named "Ibrahim number 10", the suspect was "the shooter at La Terrasse" in March 2015, and he also planned the Radisson Blu, Sevare and Nord-Sud attacks, the source said.

"He quickly confessed after his arrest yesterday (Thursday) at around 8:00 pm (2000 GMT)," the source added.

"He had arrived in Bamako on April 16 to carry out more attacks, and he spent several days in Mali without being detected," he said.

Another security source said weapons and grenades were found at the suspect's home in Bamako.

The March 7, 2015 grenade and gun attack on La Terrasse bar left five people dead -- three Malians, a Belgian and a Frenchman. It was claimed by an affiliate of AQIM, the jihadist group's North African branch.

The August attack on the Byblos hotel in Sevare killed four foreign employees of the UN Mission in Mali (MINUSMA).

And the November 20 attack on the Radisson Blu left 20 people dead, including 14 foreigners. AQIM also claimed responsibility for the assault.

The attacks were part of a string of recent jihadist strikes on the African continent that have shocked the public and posed a major challenge to security forces in the region.

On January 15, 30 people were killed, including many foreigners, in an attack on a top Burkina Faso hotel and a nearby restaurant in Ouagadougou.

Two months later, jihadists attacked a seaside resort in Ivory Coast on March 13, killing 19, with AQIM subsequently claiming the assault was one of a series of operations "targeting dens of espionage and conspiracies".

France's Operation Barkhane has at least 3,500 soldiers deployed across five countries in the region to combat the raging jihadist insurgency.