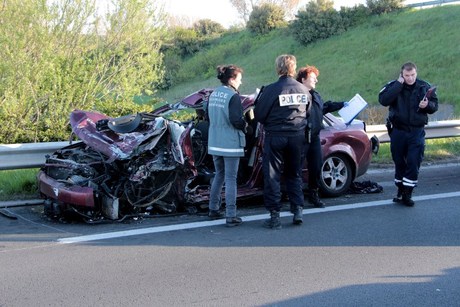 A car chase between Belgian police and suspected people smugglers on Thursday left several injured in a morning of chaos on a northern French motorway, official sources said.

At least three road accidents, one of them fatal, were reported on the A16 motorway near Dunkirk and Calais on the northern French coast -- jumping-off points for many migrants and refugees trying to reach Britain.

But shortly afterwards, a police chase reached the scene and led to a more serious accident.

Four people had fled across the nearby Belgian border after police tried to check their car at a parking area known to be used by smugglers.

Officials did not confirm local media reports that shots had been fired by police before the crash.

All four people in the suspect car were injured in the crash, two of them seriously. Police said they were foreigners, but gave no more details. The Dunkirk prosecutor said one had identified himself as Iraqi.

The prosecutor said police had been alerted by drivers after the men were seen trying to smuggle people aboard lorries in the parking area.

"They fit the classic profile of smugglers," the prosecutor said.

As traffic backed up along the motorway, yet another accident was reported shortly afterwards, and local authorities said a motorcyclist had been killed after colliding with a heavy goods lorry.