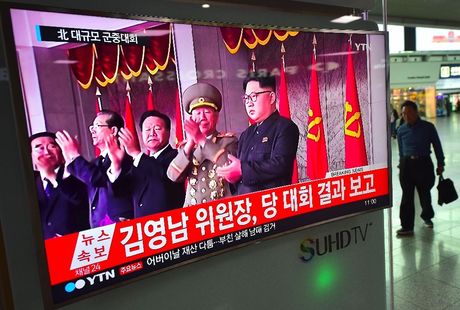 North Korea held a massive parade in Pyongyang Tuesday, turning the capital's giant square into a sea of pink, to celebrate a ruling party congress seen as a formal coronation for supreme leader Kim Jong-Un.

Kim presided over the event from a balcony overlooking the expansive Kim Il-Sung Square, with tens of thousands of people waving bouquets of artificial flowers over their heads as the young leader arrived.

Tuesday's events were an all-civilian affair apart from a military band. But several of the giant floats had military themes, showing cardboard mock-ups of missiles and space-launch vehicles.

"A strong nation needs nuclear arms and a strong army," read the sign on the missile-themed float.

North Korea followed its last nuclear test in January with a satellite launch that was widely condemned as a disguised ballistic missile test.

The country's nominal head of state, Kim Yong-Nam, addressed the parade before it began, praising Kim Jong-Un and congratulating him on his election the day before as chairman of the ruling Workers' Party.

"The election... showed the absolute trust... of our military and people in the great leader Kim Jong-Un," Kim said.

Leader Kim waved briefly to the crowd to thunderous applause but did not make a speech. Hundreds of balloons were released into the sky to boost the festive effect.

The four-day party congress, which ended on Monday, marked the first such gathering of the party's top decision-making body in more than 35 years.

The event gave the 33-year-old Kim, who came to power following the death of his father Kim Jong-Il in 2011, a podium to secure his status as supreme leader and rightful inheritor of the one-party state founded by his grandfather, Kim Il-Sung.

Kim Yong-Nam, in his speech to the parade, appeared to touch on this theme.

Now that North Korea was a powerful nation, he said, "we can concentrate on economic construction and improving people's living standards".

In speeches during the congress, Kim praised the country's purported first hydrogen-bomb test in January and defended his nuclear arsenal as a deterrent against "hostile" nations like the United States.

He also vowed to use it only if North Korea's sovereignty is threatened by another nuclear power.

The party meeting came at a time of heightened tension on the divided peninsula following the atomic test in January.

South Korean President Park Geun-Hye, who has insisted denuclearization by Pyongyang is the only way to revive talks, said the congress showed that nothing had changed.

"The North failed to show any sincere change to improve inter-Korea ties and instead vowed to continue to strengthen its nuclear programs, this time describing itself as an official atomic power," Park said at a cabinet meeting Tuesday.

Some carried giant banners reading "Mansei for comrade Kim Jong-Un, the top leader of our party and people!" and "Glory to our beloved leader!"

On the main part of the square, static crowds raised different colored placards to spell out giant slogans like "The leader's Party", "Kim Jong-Un's party" and "Solidarity", and formed elaborate mosaic images of the party and national flags.

Park groundsman Kim Son-Dong, 46, clutching a floral bouquet, said it was hard to express his feelings about taking part in the parade.

"When I saw Marshal Kim Jong-Un, I was very happy. I thank him for guiding our people wisely," he said through an official interpreter.