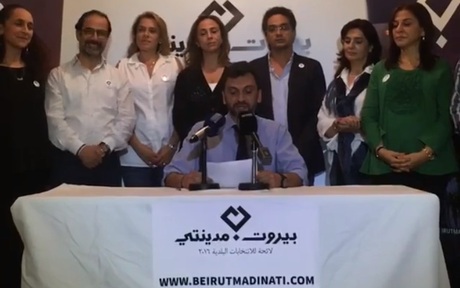 The Beirut Madinati list of independents announced Tuesday that it received 40% of the vote in the capital's municipal polls, denying claims that it received votes from certain political parties.

“Our list confronted the ruling class and all its parties and managed to garner 40 percent of the vote – votes that would have allowed ten of its members to join the municipal council had the electoral law been fair and proportional,” the head of the list, Ibrahim Mneimneh, announced at a press conference.

The announcement was made shortly after the official results were released after significant delay.

“The low voter turnout reflected the popular anger against the list of political clientelism which gathered all the forces of paralysis,” Mneimneh added.

“These forces that submerged Beirut in garbage were trying to convince us that confrontation is futile, but we proved that change is possible,” he said.

Decrying what it called “major violations, delay in the counting of votes and the attempt to annul some ballots,” Beirut Madinati said the efforts of its representatives, lawyers and the registration committees' judges had managed to “regain some of the uncounted votes.”

“The Beirut Madinati campaign has restored the meaning of elections and gave hope to the youths who struggled against the stench of trash that had trumpeted the bankruptcy of the ruling class,” the list added.

“Do not believe the ruling class. Our list did not garner these votes from a single sect or electoral district. The votes that Beirut Madinati received came from all districts and sects, seeing as we are advocates of civil, democratic and non-sectarian action that was embraced by voters from all religious communities in Beirut,” Beirut Madinati added.

Hitting back at remarks by al-Mustaqbal movement leader ex-PM Saad Hariri, who backed the rival Beirutis List, Beirut Madinati called on the public opinion not to believe “allegations that our list was supported by parties that are represented in the government.”

“The rejection of this ruling class' practices and corruption is what pushed some people to bravely liberate themselves from the directions of political leaders and to vote for the civil choice,” it explained.

“In light of the results of the polls, we warn the new municipal council against continuing the practices of distributing shares, deforming the city's landmarks, displacing its residents, selling its beaches, and neglecting its roads, sidewalks, parks and squares,” Beirut Madinati added.

It also pledged that it will remain vigilant in order to “protect the public interest and monitor the municipal council's performance.”

On Monday, Hariri accused some parties who nominated some candidates on the Mustaqbal-led Beirutis List of “voting for other lists.”

“This could have undermined equal Christian-Muslim representation and it is something that is not honorable in political action or electoral coalitions,” the former premier said.

Spearheaded by al-Mustaqbal movement, the Beirutis List comprised candidates nominated by several political parties that are represented in the government and parliament, such as the AMAL Movement, the Free Patriotic Movement, the Lebanese Forces, the Kataeb Party and the Tashnag Party.

Hopes had been high that the new list of independents could win over an established political class accused of incompetence and corruption.

A candidate from the list said Monday that even if the list does not win any seats, it has at least shaken up the political establishment.

"We're not taking part in the polls to make any political gain but to give serious competition" to traditional parties, Rana Khoury said.

"The mere fact that we made those in power... feel that they had been given a cold shower means that we achieved something positive," she said.

"We made them feel they don't represent or serve citizens as they should."

Turnout was low in the capital on Sunday with only 20 percent of registered voters casting votes, according to the Interior Ministry.

Sunday's polls were the first elections of any kind in Lebanon since the last municipal vote in 2010, in a country with a deeply divided political scene that has not had a president for the past two years nor voted for a parliament since 2009.

Fully agree with Madinati. These are the people we need: honest + competent + lebanese.

I am with people like these. Hopefully if they get key positions power wont corrupt them

The Madinati are to be commended. 40% is significant. Next time 51+%. It is time for Lebanon to outgrow its feudalistic past and join the 21st Century with an agenda of formulating and implementing real solutions for the people of the country rather than protecting some sect or party by holding a seat and doing nothing else.
This is the game of the Beirut for Beirutis, though I am "Beiruti", these guys, LF, Future, FPM, PSP, these are all names of parties that are fake parties. They are actually the fiefdoms of secular lords, the political class that took Lebanon into civil war, and who emerged from the war with their powers and prerogatives in tact, still wielding their Medieval power by their hold on an ignorant fearful people. The Mandinati have freed themselves of the Ziam and the fear and ignorance of confessional identity politics and have taken the first step toward a civil society. Hopefully, they will not stop, but take the next step.