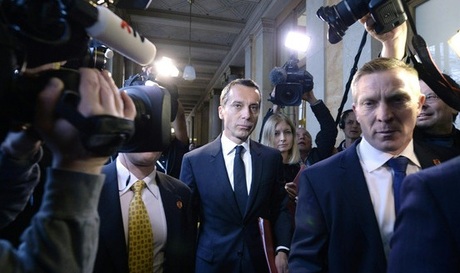 Austria on Tuesday appointed Christian Kern as its new chancellor, with the ailing centrist government pinning its hopes on the ex-railway boss to help stem the surge of the far-right.

"You are taking on a great and beautiful but also difficult role with a lot of responsibilities," said President Heinz Fischer as he swore in Kern at Vienna's Hofburg palace.

The 50-year-old, renowned for his business achievements and snappy dress sense, replaces fellow Social Democrat Werner Faymann who threw in the towel on May 9 after a string of poor election results.

The new leader faces the major challenge of uniting a fractious SPOe party and smoothing over tensions with its coalition partner, the conservative People's Party (OeVP).

Kern also has to convince Austrians unhappy about the arrival of migrants and rising unemployment to vote for his party at the next scheduled elections in 2018.

In the first round last month, Hofer comfortably beat his rival by 35 percent to 21 percent.

Meanwhile the SPOe and OeVP were knocked out of the race with just 11 percent of the vote. The dismal performance means that for the first time since 1945, Austria's president will not come from one of the two main parties.

This presents the risk of the new head of state taking advantage of some of the president's never-before-used powers, such as firing the government.

Kern's biggest headache will be to decide whether to ditch the SPOe's 30-year-old taboo on cooperating with the far-right FPOe, dating back to when the late, controversial Joerg Haider became the party's leader.

"We won't work with parties, which stir up hatred against other people and minorities," Kern said at a press conference shortly before his appointment.

"From my point of view it's crystal clear that principles must come before maintenance of power," he added.

The father of four also needs to revitalize the SPOe's deadlocked coalition with the OeVP and agree structural reforms to get Austria's economy, faltering of late, moving again.