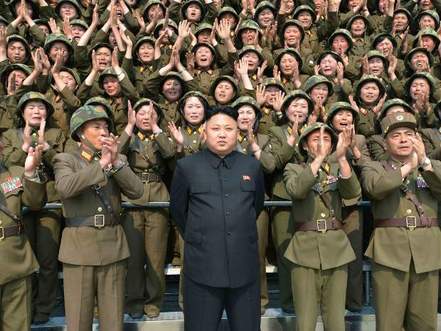 The European Union on Thursday beefed up sanctions against North Korea over nuclear and ballistic missile tests carried out in defiance of United Nations resolutions.

The 28-nation bloc said it was adding 18 persons and one entity to its asset freeze and travel ban blacklist, complementing measures adopted by the U.N. against the Democratic People's Republic of Korea, the north's official name.

"The persons subjected to restrictive measures ... are mostly high-ranked military officials involved in key bodies responsible for supporting or promoting the DPRK's nuclear-related, ballistic missile-related or other weapons of mass destruction-related programs," the EU said in a statement.

"The additional listed entity is involved in the development and operational implementation of ballistic-missile related or other weapons of mass destruction-related programs," it said.

The European Council, which groups EU member states, said the decision means sanctions are now in place against 66 individuals and 42 entities in North Korea.

The new names will be published on Friday.

In March, the U.N. Security Council imposed the toughest sanctions yet against Pyongyang, including unprecedented inspections of all cargo to and from the notoriously reclusive country which has locked itself away from the rest of the world for the past 60 years.

The U.N. sanctions also banned or restricted exports of coal, iron and iron ore and other minerals, along with the supply of aviation fuel as part of efforts to get Pyongyang to abandon its nuclear and missile ambitions.

The EU established diplomatic relations with North Korea in 2001 but contacts are minimal. It adopted its first sanctions in 2006.