Netanyahu Seeks to Ease Fears over Changes in His Govt. 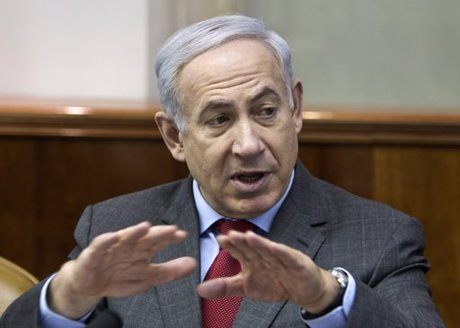 Israeli Prime Minister Benjamin Netanyahu sought on Sunday to ease concerns over the expected entrance of a hardline nationalist party into his coalition, saying his government would still seek peace with the Palestinians.

Netanyahu was expected to soon conclude negotiations with the Yisrael Beitenu party led by Avigdor Lieberman, a far-right politician detested by the Palestinians.

Lieberman would take on the key role of defense minister under the deal being negotiated and expand Netanyahu's current majority of 61 seats in the 120 seat parliament to 66.

The move would tilt further to the right Netanyahu's government, which is already among the most right-wing in Israel's history.

"I want it to be clear that an expanded government will continue to aspire to a political process with the Palestinians and will do it with help from parts of the region," Netanyahu said at the start of the weekly cabinet meeting.

Adding Lieberman's party to his coalition would bring weeks of political maneuvering to a stunning conclusion.

Netanyahu had earlier engaged in negotiations with Labor party leader Isaac Herzog to join the government before turning to Lieberman instead.

Defense Minister Moshe Yaalon, from Netanyahu's Likud party and a former armed forces chief, announced his resignation from the government on Friday, harshly criticizing the premier in the process.

He warned of a rising tide of extremism in the Likud and the country as a whole.

Yaalon insisted on senior officers' right to "speak their mind."

The defence minister also found himself under fire from far-right cabinet members and their supporters over the arrest and prosecution of a soldier who shot a wounded Palestinian assailant in the head as he lay on the ground without posing any apparent threat.

Yaalon strongly criticized the soldier's actions, while the far right, including Lieberman, defended him.