Report: Mustaqbal to Use Ramadan Iftars to Bridge Divide among Allies 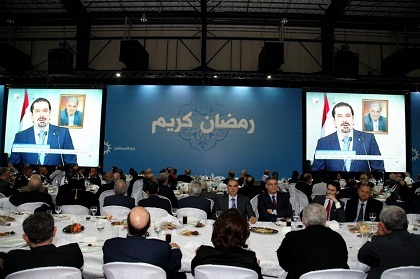 The Mustaqbal Movement will take advantage of the advent of the holy month of Ramadan to bridge gaps among its allies in wake of the recent municipal elections, reported the Kuwaiti al-Anba daily on Sunday.

Sources from the movement said that iftar meals will serve as occasions to overcome divides “among allies and friends.”

Head of the movement MP Saad Hariri will host a series of iftars at the Center House, starting the fourth day of the fasting month.

Differences emerged between Hariri and Rifi in wake of the former's nomination of Marada Movement chief MP Suleiman Franjieh as president late in 2015.

The gap widened when the MP failed to endorse Rifi's resignation from cabinet earlier this year.

He stepped down from his post in protest against “the power Hizbullah wields over the government and its decision-making.”

Last week, Rifi marked a resounding victory in municipal elections in the northern city of Tripoli. A list he endorsed was running against one backed by Hariri, former Premier Najib Miqati, and former Minister Mohammed al-Safadi and Faisal Karami. Two other lists were running in the elections.

Ramadan is set to begin next week.

Hariri's grip on the Sunni community is long gone.