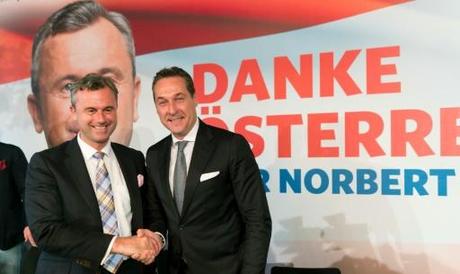 "We are not sore losers. This is about protecting the very foundations of democracy... The extent of irregularities is more than terrifying," FPOe leader Heinz-Christian Strache told a news conference in Vienna.

"You don't have to be a conspiracy theorist to have a bad gut feeling about this whole election... Without these glitches and irregularities (FPOe candidate Norbert) Hofer could have become president."

Preliminary results released that evening had given a narrow lead to gun enthusiast Hofer, 54, presented as the friendly face of the FPOe, but who is highly critical of Islam and the EU.

However after some 700,000 postal votes -- a record number -- were counted, Van der Bellen, 72, was declared the winner of the largely ceremonial but coveted presidency the next day.

Authorities have said they were investigating several cases of alleged election irregularities. For the most part, however, they concerned postal votes being opened too early.

The Greens said Wednesday that the FPOe "has failed to present one single concrete case of a vote being miscounted". Procedural problems "need to be avoided in future but are not electoral fraud".

But Strache, flanked by two lawyers, said Wednesday that the law had been broken in 94 of Austria's 117 constituencies, including 82 where postal votes were counted too early, representing over 570,000 votes.

The constitutional court has four weeks -- until July 6 -- to decide if the FPOe's 150-page challenge stands up. The election could in theory be held again partially or in its entirety.

This could make for a tense wait with Van der Bellen set to be sworn in on July 8. Court spokesman Christian Neuwirth said it was "getting straight down to work" in order to finish well in time.

Hofer -- absent at Wednesday's news conference -- for his part accepted defeat on May 23 but Strache has been crying foul ever since the result was announced.

Strache's popular Facebook page -- "liked" by 370,000 people -- has been inundated with calls for him to challenge the outcome.

He was however obliged to call on supporters to tone down their comments after some called for violence and Van der Bellen's address was published, reportedly prompting extra police protection.

Mirroring populists elsewhere, the FPOe has tapped into unease about immigration and the faltering economy to win support principally from poorer, less educated voters but also across the board.

Austria last year saw 90,000 people claim asylum, the second-highest number per capita in the EU, while around 10 times as many passed through at the height of Europe's migrant crisis.

The FPOe is also looking ahead to the next general elections, due in 2018, leading opinion polls with more than 30 percent.

The two centrist parties in the governing coalition look set to fall short of a majority, despite being headed by popular new Chancellor Christian Kern since mid-May.

Next week far-right politicians from across Europe are due to meet in Vienna, including Marine Le Pen from France's National Front, who will run for president in 2017.