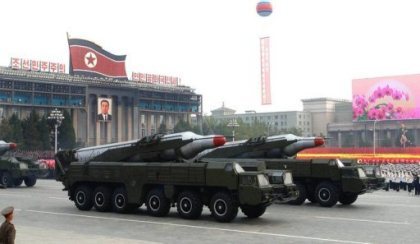 North Korea threatened Thursday to turn South Korea's presidential palace into a "sea of fire" in response to any provocation, a day after Seoul's military held a big exercise near the border.

The land, sea and air drill was staged to mark the first anniversary of a deadly North Korean attack on the South's border island of Yeonpyeong, which sparked outrage among South Koreans and prompted international alarm.

Pyongyang has always justified its bombardment on November 23, 2010 as a response to a South Korean artillery drill on Yeonpyeong, which it said dropped shells into the North's territorial waters.

The North's military Supreme Command said Thursday the South should not forget the lesson of the Yeonpyeong attack.

It described Wednesday's anniversary drill as "little short of a new political and military provocation".

If the South dared in future to "fire one bullet or shell" towards the North's territorial waters, air space and land, a "sea of fire" would engulf Seoul's presidential palace.

The North's armed forces "are in full readiness to go into a decisive battle to counter any military provocation", said the Supreme Command statement on Pyongyang's official news agency.

Last year's shelling killed two Marines and two civilians and damaged scores of buildings. It was the first attack on a civilian-populated area since the 1950-1953 war and caused fury in the South.

Seoul's military faced severe criticism for its perceived slow and weak response and Wednesday's drill was intended to simulate a tougher response -- including air strikes -- to any new attack.

South Korea has significantly strengthened troop levels and weaponry -- including multiple rocket launchers and Cobra attack helicopters -- on Yeonpyeong and other frontline islands in the past year.

The North's statement "is meant as a strongly worded warning in that it threatened a sea of fire against the (presidential) Blue House," Yang Moo-Jin of Seoul's University of North Korean Studies, told Agence France Presse.

"However, it does not foreshadow any military action."

Last year's island bombardment came eight months after the sinking of a South Korean warship with the loss of 46 lives. The North denies the South's claim that it torpedoed the corvette.

Cross-border tensions have eased somewhat this year. But Seoul insists Pyongyang admit responsibility for both incidents before there can be any substantial dialogue, a demand restated Wednesday by President Lee Myung-Bak.

Seoul and U.S. officials said the 2010 bombardment was probably ordered to burnish the military credentials of Kim Jong-Un, youngest son and heir apparent of Kim Jong-Il.

The North has this year made an international appeal for food aid and restated its willingness to return to nuclear disarmament talks.

U.N. officials say a quarter of the North's people urgently need food aid while Seoul officials say the situation is no worse than normal.

They suspect its neighbour wants to stockpile supplies before next year's 100th anniversary of the birth of founder Kim Il-Sung. The North customarily doles out extra food to its people on major anniversaries.

The United States and its allies say the North must take steps to show its sincerity before disarmament talks can resume.