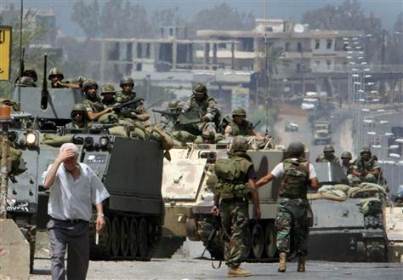 The army intelligence said on Thursday that it had foiled two Islamic State group plots that aimed to carry out attacks on a tourist facility and a densely populated area in Lebanon, the Army Command Orientation Directorate said in a statement on Thursday.

“The army was able to thwart a highly dangerous scheme planned by the terrorist Islamic State group,” the statement said.

“It arrested five IS members involved, including the mastermind behind the plot,” added the statement.

“The detainees confessed to having carried out terrorist acts attacks against the army previously.”

“The plan aimed to target a large tourist facility and a densely populated area in Lebanon.”

Investigations have been kicked off under the supervision of the related judicial authorities.

A military official told Agence France-Presse that the famed Casino du Liban was among the targets.

It was not clear when the arrests took place, but the military official said the attacks were to have been carried out "10 days ago."

They would have targeted "the Casino du Liban as well as a crowded area, like a shopping center, the southern suburbs of Beirut or indeed the neighborhoods of Hamra or Ashrafieh," the official said.

He said "suicide bombers and armed men" were to have carried out the attacks, and added that investigations would follow on other possible cells and potential targets.

Earlier in the day, Voice of Lebanon radio (100.5) had quoted unnamed sources as saying that the two targets that were eventually mentioned in the army statement were the Casino du Liban and the City Center mall in Hazmieh.

terrorist your salafis from ISIS cannot be compared to the Resistance, even though that is what zionists and Americans likes to do.

Must be a boring life, to make a new account on Naharnet every single day.