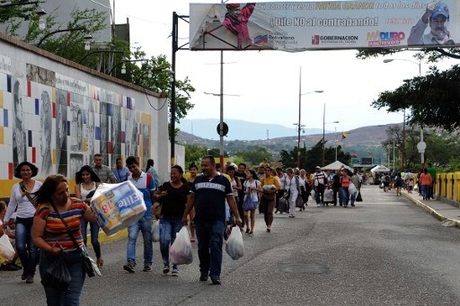 Venezuela will temporarily re-open its border with Colombia on Sunday, a state governor said, a move that will allow desperate Venezuelans to stock up on food, medicine and other basics sorely lacking in their country.

"We will not put up any obstacle... whoever wants to cross can cross," Jose Vielma Mora, governor of the border state of Tachira, told reporters Thursday.

However, he dismissed suggestions that the border opening was tantamount to a "humanitarian corridor."

Last Sunday, some 35,000 Venezuelans poured across the border after President Nicolas Maduro authorized a 12-hour opening of the pedestrian bridge that connects Tachira, Venezuela and Cucuta, Colombia.

He allowed the reopening after 500 desperate Venezuelans stormed the border in search of basic goods.

Thanks to the temporary border reopening last week, those who crossed into Colombia were able to stock up on goods such as flour, oil, toilet paper and shampoo.

Venezuela has suffered crippling shortages for months, a ripple effect from the falling price of oil, the country's primary export. Critics also blame grave mishandling of the state-led economy.

Maduro, an elected socialist, has blamed the shortages on an "economic war" he says is being waged by conservative business elites bent on ousting him.