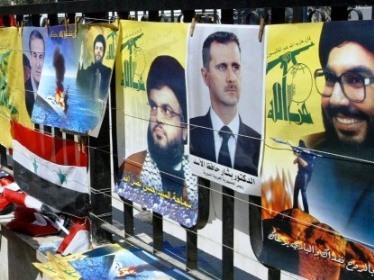 In a telephone interview with Agence France Presse, Asaad also called for foreign air strikes on "strategic targets" in Syria to speed up the fall of the regime.

Hizbullah has repeatedly denied reports accusing the party of involvement in Syria’s unrest.

“Hizbullah has already released several statements denying the accusations launched by some Syrian dissidents and some other parties about Hizbullah’s involvement in the events taking place in Syria, and its statements had always stressed its keenness on Syria and its leadership, people and institutions and its wishes as to reaching solutions that meet the aspirations of all Syrians regarding reform and stability,” the party said in a statement in August.

“Hizbullah’s response to the claims circulated by these dissidents stems from its keenness on clarifying the picture and preventing the Arab and international public opinion from being misled by some individuals who are seeking to gain the support of the international conspiracy against the forces of resistance and defiance in the region in order to achieve their own, narrow-minded goals at the expense of the Syrian people’s blood,” the party added.

If this is the case then the Sunni crazies are better off pulling their pants up and run away as fast and as far as they can. They can choose to remain, if they want, but prepare the Kleenex like the Israelis did in the South when they were collectively crying like little girls.

why wouldn t they send their gangs? they already threaten lebanon to not welcome syrian refugees....

We have seen many youtubes about this...

Those bearded thugs can go to hell!

@seesaw: thanks for the laugh!

Hezbollah does whatever Iran orders them to do.

Black shirt sniping, and killing unarmed people are their specialties. They were trained how to do that in Iran.

Seesaw..be careful what you wish for, your days of teshbee7 are numbered. The Sunnis are a vast majority in the region and the shee3a are only a fraction. You are really stupid to wish for a civil war. The rules of the game are changing before your eyes idiot.

(((seesaw) )) You are now on the list of terrorists and being watched.
you better run and join your people before its too late.you just shot yourself in the foot. you are barking from the land of the free. .

The Hezz are going to have a hostile regime and hostile border very soon. They are trying to save ASSad, but at the same time screwing themselves for the next Israeli war.

I am waiting for the Hezz bodies to come back over the border by the dump truck load.

@homelandsecurity? With idiots like you, what security to the homeland!!!