Will U.S. Strikes on IS Deepen Libya Divisions? 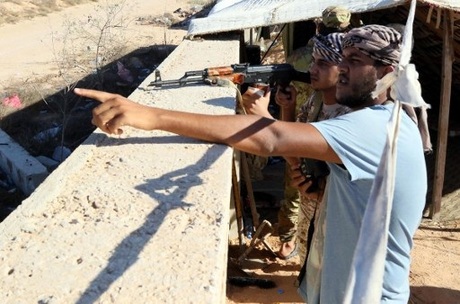 The United States has opened a new front in its campaign against the Islamic State group, launching air strikes to support Libyan forces battling to oust the jihadists from Sirte.

Who's fighting IS in Sirte?

The forces battling IS in Sirte, halfway along Libya's coastline, are allied with the country's U.N.-backed Government of National Accord (GNA).

Their command center is in Misrata, 190 kilometers (120 miles) to the northwest.

They include former Libyan army units and factions from across western Libya, notably the powerful Misrata militias.

Formed during the 2011 uprising that toppled and killed autocrat Moammar Gadhafi, the Misrata militias are a key force in Libya, armed with tanks, MiG fighter jets and attack helicopters.

Forces allied with a rival government in Libya's far east, which does not recognize the GNA's legitimacy, are not taking part in the Sirte operation.

After a month of advances against IS in the surrounding desert, GNA forces entered Sirte on June 9.

Their progress slowed as IS hit back with car bombs, snipers and booby traps.

GNA forces have lost 300 fighters since the start of the operation.

"There are targets that are hard to hit because they are among the houses," said Rida Issa, the GNA forces' spokesman.

"American air strikes, which are very accurate, will help to destroy those targets," he added.

But whether that will shift the balance in the GNA's favor is an open question.

"It's not a game changer yet -- it'll be interesting if they keep it up," said Patrick Skinner, a Libya expert with the U.S.-based Soufan Group consultancy.

Supporting pro-GNA militias, the only forces directly fighting IS in its Libyan "emirate", was a natural move for Washington, said Mattia Toaldo, a Libya expert with the European Council on Foreign Relations.

From the militias' perspective, working with the U.S. allows them to benefit from the Pentagon's wealth of experience fighting the group in Iraq and Syria.

But there are also political reasons for Misrata forces to seek American support.

Skinner said the operation could benefit the GNA in the long term by creating channels for liaison with the Pentagon.

That could strengthen the GNA's position vis-a-vis its eastern rival.

The strikes came days after it emerged that French special forces were working with eastern forces, in what the GNA criticized as a "violation" of the nation's sovereignty.

For Misrata militias, working with the U.S. may be a way of "showing other Libyans, particularly those in the east, that they have good relations with outside powers, too," said Toaldo.

What political fallout?American strikes in Sirte may accelerate the taking of the city, but could complicate the struggle between Libya's rival governments.

The eastern government on Wednesday condemned the American strikes.

"Sirte has become a political playing card with a major role in the American elections," he said.

Toaldo said statements from the authorities in the east showed that officials there were "very nervous."

The anti-ISIS fight has always been their main point of attraction in Western capitals," he said, using an alternative acronym for IS.

Is Libya a new front in the global fight against IS?It is not clear whether other members of the American-led coalition fighting IS in Iraq and Syria will join the battle for Sirte.

But U.S. President Barack Obama has said he believes making sure the GNA can "finish the job" serves America's national security.

"We're working in partnership with them to assure that IS does not get a stronghold in Libya, even as Libya begins what is going to be a long process to establish a functioning government and security system," he said on Tuesday.

A Pentagon spokesman said the strikes would last weeks rather than months.

But it is too early to say how long the campaign will go on, said Toaldo.

"How many targets for air strikes can there be in 20 square kilometers controlled by ISIS in Sirte?"