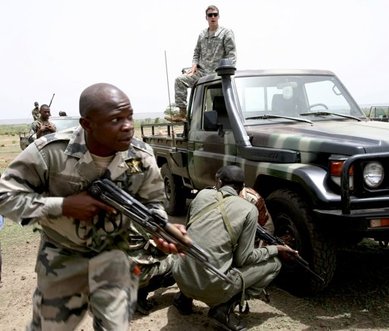 Authorities on Saturday evacuated all tourists from the ancient city of Timbuktu in northern Mali, a day after three foreigners were kidnapped and another killed, an airport official said.

The 20 or so tourists were flown by government-chartered aircraft to Mopti, south of Timbuktu, and to the capital Bamako.

On Friday an armed gang snatched a Swede, a Dutchman and a man with dual British-South African nationality as they sat in a restaurant in the central square and killed a German with them who tried to resist, officials said.

French soldiers had already arrived to join Mali's army in looking for the pair in line with agreements with regional countries, a source at the airport confirmed on condition of anonymity.

Although there has been no immediate claim of responsibility, the incidents are the latest in a series of abductions of foreigners believed to be the work of Al-Qaeda in the Islamic Maghreb (AQIM).

AQIM has bases in the northern Mali desert from which it organizes raids and kidnappings and deals in the trafficking of weapons and drugs.

It also operates in Niger, Mauritania and Algeria.

Friday's incident brought the total number of foreigners held in the vast Sahel region to nine and dealt another massive blow to Mali's struggling economy.

Timbuktu, an oasis known as the pearl of the desert and a World Heritage site renowned for its Islamic architecture, was already suffering as foreign governments warned their citizens not to visit the region.

The two French captives, named in documents seen by AFP as Philippe Verdon and Serge Lazarevic, had arrived in Hombori on Tuesday night on a mission to take soil samples in the Hombori region for the company Mande Construction Immobilizer where it plans to build a cement factory.

The kidnapping was well organized, a source in the security forces at Hombori said. "We think that these people came from one of Mali's neighboring countries to take part in the operation."

Police said five people had been arrested including the Frenchmen's guide, named as Ibrahim Ould Bah.

The kidnappings were the first in this region situated to the south of the vast Malian desert and close to Dogon territory, which is popular with tourists because of the famed masks, architecture and dances of the Dogon people whose land lies close to the border with Burkina Faso.

French authorities have classified northern Mali as a "red zone", a recommendation that travel there be avoided. On Saturday, the French foreign ministry enlarged the area to include Hombori to the south.

The capital Bamako and the rest of the country is designated an "orange zone", meaning travel there is not recommended unless absolutely necessary.

The four were among seven people kidnapped at Arlit, the main uranium mining town in Niger. They included an executive of the French nuclear giant Areva and his wife, both French, with five employees of a sub-contractor of Areva, who were identified as three French men, a Togolese and a Madagascan.

The French woman and the two African men were freed on February 24, but the others are still being held.