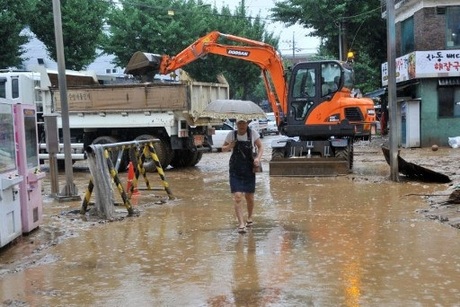 Flooding following heavy rain has killed 60 people and left over 44,000 homeless in North Korea, the United Nations said Tuesday, after the country reported that a northeastern river suffered its worst-ever flood.

Pyongyang said Friday the Tumen river, which partially marks the border with China and Russia, experienced the biggest flood ever recorded due to a rainstorm that began four days earlier.

Nearby areas including Musan and Hoeryong were hard hit, with 60 dead and five percent of the population homeless, the U.N. Office for the Coordination of Humanitarian Affairs said in a statement.

It cited data from the North's government.

"Communication with and access to affected areas remains a challenge... immediate needs have been identified as emergency shelter, food, medication, water and sanitary items," it said.

Nearly 9,000 buildings were destroyed or damaged with 10,000 hectares (24,711 acres) of farmland flooded, it said, adding joint relief efforts involving the U.N. and the North were underway.

The North's state media said Friday that 15 people were missing after over 17,000 houses were destroyed or damaged.

The impoverished nation is vulnerable to natural disasters, especially floods. At least 169 were killed by a massive rainstorm in the summer of 2012.

Its territory is largely composed of mountains and hills that have long been deforested for fuel or turned into terraced rice fields. This  allows rainwater to flow downhill unchecked.

A series of floods and droughts was partially responsible for a famine that killed hundreds of thousands between 1994-98, with economic mismanagement and the loss of Soviet support exacerbating the situation.