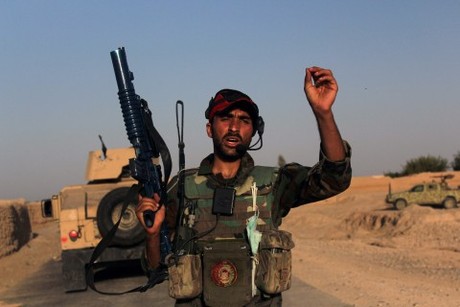 The Taliban stormed into Tarin Kot Thursday, triggering heavy fighting around government buildings as panicked residents scrambled to flee the capital of southern Uruzgan province, the latest city to be targeted by insurgents.

Pitched battles prompted urgent calls from officials for reinforcements and air support, after the militants toppled security posts on the outskirts to breach the city gates.

Residents said senior officials were abandoning government buildings and fleeing to the airport on the outer edges of the city, which has practically been besieged by the Taliban for months.

"If reinforcements do not arrive the city will collapse into the hands of the Taliban," Karim Khademzai, head of the provincial capital, told AFP.

The Taliban are fighting to take over police and intelligence agency headquarters, residents said, voicing fears they will storm the local prison to free captured insurgents.

Tarin Kot's normally bustling streets were deserted and shops closed as civilians sought to escape from the city.

Sabir Menawal, a Tarin Kot resident, said Taliban fighters entered his house near the police headquarters and took up positions inside to fire at government buildings.

"The Taliban instructed us to leave the area immediately," Menawal told AFP. "I fled with my family to a safer area of Tarin Kot, but we fear fighting could spread to this area too."

In a sobering admission, Uruzgan's police chief Wais Samim said many of the city's outer defences had fallen to the Taliban without a fight.

"Some policemen retreated from their outposts. Some people here deliberately want the enemy to succeed," he told AFP. "We will address this issue once we repel the enemy."

The fighting in Uruzgan comes as the Taliban are threatening to capture Lashkar Gah in neighbouring Helmand province, and northern Kunduz, which the insurgents briefly seized last year in a stinging blow to Afghan forces.

- Deteriorating security -President Ashraf Ghani's office, meanwhile, said the government will not allow "Uruzgan to become a sanctuary for terrorists".

"Reinforcements have reached the province, and the local police chief and provincial officials are on the frontline fighting the enemy," presidential spokesman Shahhussain Murtazawi said on Facebook.

That claim was refuted by multiple Tarin Kot residents, who said senior officials had been seen fleeing to the airport.

"Many provincial officials including the governor and other heads of government departments are at the airport," Khademzai told AFP.

General Abdul Raziq, the powerful police chief of Kandahar, said he was personally leading a contingent of military reinforcements to Uruzgan.

"We are going to Tarin Kot with hundreds of forces to repel the enemy attack," Raziq told AFP.

NATO has not yet responded to AFP's request for comment on whether foreign forces will intervene in Uruzgan.

Since being toppled by a US invasion in 2001, the Taliban have been seen as a rural militant movement capable only of hit-and-run attacks on cities. But they have demonstrated an alarming new push into urban centres over the last year.

The deteriorating security highlights the struggle of Afghan forces, stretched on multiple fronts, to secure remote provinces such as Uruzgan, where Australian, Dutch and American troops fought for years.

As the Taliban edged closer to Tarin Kot on Wednesday, they promised a general amnesty to government forces who surrender unconditionally.

Defence ministry spokesman Mohammad Radmanish however rejected what the Taliban's "propaganda campaign", saying the Taliban would be beaten back.