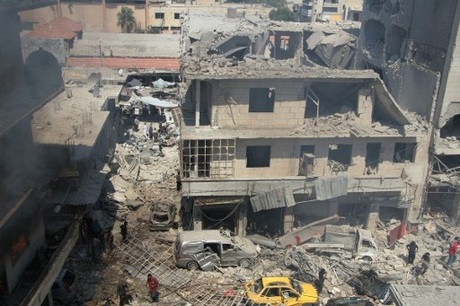 Syria's opposition was weighing whether to take part in a truce brokered by Russia and the United States due to start on Monday, after air strikes killed dozens in rebel-held areas.

Brokered after marathon talks by the Russian and U.S. foreign ministers, the ceasefire has been billed as the best chance yet to end Syria's five-year civil war.

Key regime ally Iran welcomed the plan on Sunday and called for "comprehensive monitoring" of the truce, particularly along Syria's volatile borders.

But even as world powers threw their support behind the agreement, scores were reported dead from a barrage of unidentified raids in two key northern cities in opposition-held territory.

At least 62 people,  including 13 women and 13 children, were killed in Saturday's bombardment on Idlib city, the Syrian Observatory for Human Rights monitoring group said Sunday.

The strikes hit several areas in the rebel-held city, including a market full of shoppers preparing for the Muslim holiday of Eid al-Adha, which begins Monday.

"Bring on the #SyriaCeasefire," he tweeted on Sunday.

Fresh bombardment also hit the battleground city of Aleppo on Sunday, the Observatory said, a day after 12 civilians were killed in unidentified raids there. No information on casualties from Sunday's bombardment was immediately available.

"We hope there will be a ceasefire so that civilians can get a break. The shelling goes on night and day, there are targeted killings, besieged cities," said Abu Abdullah, who lives in Aleppo's rebel-held east.

"Civilians have no hope anymore."

In a major blow to the opposition, pro-regime forces reimposed a devastating siege on the city's eastern districts last week.

Lebanon's Hizbullah, which has intervened militarily on behalf of Assad, said late Saturday it supported the deal.

But Ghasemi said its success relied on the creation of "a comprehensive monitoring mechanism, in particular control of borders in order to stop the dispatch of fresh terrorists" to Syria.

Syria's main opposition group the High Negotiations Committee -- which brings together political dissidents with armed rebel factions -- had yet to formally respond.

HNC member Bassma Kodmani told AFP on Saturday that her group "cautiously welcomed" the deal but was skeptical that Damascus would comply.

Ahmad Saoud, head of the U.S.-backed Division 13 rebel group, wrote on Twitter he was "starting to feel that the truce is a military trap to kill us even more."

The agreement was reached after talks between U.S. Secretary of State John Kerry and Russian Foreign Minister Sergei Lavrov in Geneva.

It would see fighting and indiscriminate air attacks halt across the country, starting at sundown on Monday for a period of 48 hours, which could then be renewed.

To get aid into the battered second city of Aleppo, a "demilitarized zone" would be established around the Castello Road into the city.

If the ceasefire holds for one week, the U.S. and Russia could start joint operations against jihadists from the Islamic State group and Fateh al-Sham, formerly known as al-Nusra Front.

On the ground, residents were split on whether a truce could hold, saying they were exhausted after several rounds of failed ceasefires, most recently in February.

"The Syrian people -- whether in areas controlled by the regime or the opposition -- have lost faith in both sides," said Safwan Badawi in east Aleppo.

Abu Hasan, who works with a local civil society group, laughed off the ceasefire plan as "a joke."

"More importantly, Washington has finally agreed to joint military action" against jihadist groups, it wrote, as Kerry had been "forced to present a number of compromises to the Russian negotiator."

Several attempts at peace negotiations have faltered since Syria's war erupted, with talks earlier this year in Geneva fizzling after the opposition walked away in protest at the humanitarian situation.

Damascus resident Taher Ibrahim told AFP he did not expect the new deal to play out any differently than February's tattered truce.

"Nobody among the Syrian population accepts this agreement... (the opposition) are all the same and none of them will commit to this truce," he said.

IDLIB is de facto Qaeda controlled and so is the takfiri rebel districts of Aleppo.

The toll included 13 women and 13 children, it said.

so those women and children are Nusra and ISIS according to you.

according to rami abdel observator, every single terrorist killed is a baby girl

The title and phrasing by naharnet are highly misleading, they give the impression that the latest strikes are somehow in contradiction with the ceasefire agreement, they are not.
-first, because the ceasefire doesn't start until monday
-second, because al qaeda (whatever their latest brand name is) and daesh are excluded and will continue to be hunted down
-and third because other groups who do not adopt and comply with the terms of the agreement will also continue to be hunted down (ahrar al sham has just announced today their commitment to the syrian agriculture and their desire to serve as fertilizer for it)

it's quite touching of them, especially considering that after the generous donation they made in southern Aleppo these last days, the land is already healthily fertilized

(and these are just their losses from the Syrian counter-offensive, it doesnt include their initial losses to break the siege, which were much higher)

"according to rami abdel observator, every single terrorist killed is a baby girl"

Any proof of that? Any source for your random accusations? Any argument to back your claims?
Nope? That's what i thought. Go spread your Taqiyah elsewhere.

Three more hezbollah terrorists announced today their commitment to the syrian agriculture and their desire to serve as fertilizer for it.

Yup the Regime will uphold this ceasefire as much as it respected all the ones it promised to uphold in Lebanon. We heard the same kinds of excuses from the apologists as well then.