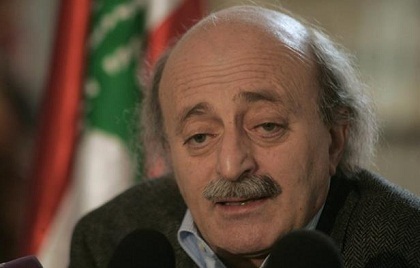 A judicial source in the Military Court which received the preliminary investigation in the case of detained Youssef Fakher, nicknamed the Cowboy, said that the suspect is involved in a Mossad planning of an assassination attempt against Druze leader MP Walid Jumblat, As Safir daily reported on Wednesday.

Fakher has been arrested by the General Security about a month and a half ago on suspicion of dealing with the Israeli enemy and for involvement in buying arms and forming armed groups, added the daily.

The suspect is involved in an assassination attempt against head of the Progressive Socialist Party, Jumblat. He is also accused of fomenting sedition among the Druze and Lebanese communities as commissioned by the Mossad through a Syrian agent known as Mandi al-Safadi (born in the occupied Golan) who worked directly with the office of Israeli PM Benjamin Netanyahu.

“Preliminary investigations with Youssef Fakher have shown that during his two visits to Lebanon he was tasked with buying weapons and forming armed groups for the purpose of creating a specific environment among the Druze community to relate it to the Syrian situation and the Israeli plans on the southern front (of Syria),” said the judicial source on condition of anonymity.

Early in September, assassination threats against Jumblat emerged and the security measures were upped around his place of residence in Beirut, media reports had said.

As Safil daily is as credible as when mowaten of iran claims he is Lebanese, secular, and with only one account.

Another General Security fantasy! Why would the Mossad eliminate someone who is a critic of the Syrian regime and Iran? It just does not make any sense. Israel always takes care of hezbollah and Iran's critics.

The mosad are also plotting to assassinate General Ashraf Rifi because he opposes Hezbollah just like they did with the rest of the slain M14 leaders and thinkers.

Just do it whoever it is.

Amazing how we are always brave at catching anti-Syrian groups.

That is abbas ibrahim's main job.

"It is hard to believe that the Israeli enemy wants the natives to be divided so they can conquer them? "

But it seems the Israeli "enemy" always chooses anti Iran Anti Hezbollah figures for its assassinations. Don't you think if for one time only assassinating a March 8 figure would also yield the same result?