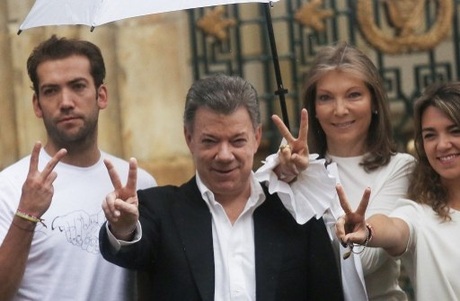 Colombian President Juan Manuel Santos said Tuesday that a ceasefire with FARC rebels will end on October 31, as both sides scramble to find a solution to the half-century conflict after voters rejected a peace deal.

The chief of the Revolutionary Armed Forces of Colombia (FARC) Rodrigo Londono, better known as Timoleon "Timochenko" Jimenez, promptly took to Twitter to ask "And after that, the war continues?"

Just a day earlier, he had vowed the guerrillas would continue to observe the ceasefire despite the referendum results.

"I hope we can move forward... to realize the necessary agreement to find a solution to this conflict," Santos said in a televised address from the presidential palace.

As part of his efforts to salvage the peace deal on which he has staked his legacy, Santos plans to meet with his former boss and current nemesis Alvaro Uribe at the presidential palace at 11:30 am (1630 GMT) Wednesday, officials said.

The high-stakes meeting comes after Colombians on Sunday narrowly voted against a deal Uribe had condemned as too lenient on the leftist guerrillas -- throwing the nearly four-year-old peace process into disarray and giving the former president a major victory.

Santos is fighting on two fronts after the unexpected result: he must find a compromise solution acceptable to both the hardliners in Uribe's camp and the FARC.

The government and the FARC have had a ceasefire in place since August 29, five days after the two sides clinched a peace deal following five years of arduous negotiations in Cuba. The ceasefire had originally been intended to be permanent.

The government's chief peace negotiator, Humberto de la Calle, has returned to Havana to see whether the FARC is open to revising the deal.

"The decision on whether to open up the agreements is a decision that falls to the FARC," Foreign Minister Maria Angela Holguin told a press conference.

Santos has named Holguin, de la Calle and Defense Minister Luis Carlos Villegas to hold talks with the opposition on salvaging the deal.

Holguin said the government is "fully ready" to listen to the deal's opponents.

She admitted the government was left scrambling by the surprise referendum result, which flew in the face of opinion polls.

"There was no Plan B. We believed the country wanted peace," she said.

"The mandate for the U.N. political mission... is for a peace deal. At this point, we don't have a peace deal," Holguin told journalists.

The meeting between Santos and Uribe comes after the latter's right-wing party, the Democratic Center, snubbed emergency talks that Santos convened Monday at the presidential palace to chart a way forward with the country's top political leaders.

The two men have a complicated history.

Santos served as Uribe's defense minister from 2006 to 2009, leading a major army offensive against the FARC.

But he shifted gears after succeeding Uribe in 2010, opening peace talks with the weakened rebels -- and provoking a falling-out with his former boss, who branded him a traitor.

Santos will also meet with former president Andres Pastrana (1998-2002), another major opponent of the peace deal, an hour before Uribe, his office said.

Both meetings will be held behind closed doors.

Santos said on Twitter he had invited the two former presidents "to dialogue... in a constructive spirit."

His last known meeting with Uribe was in January 2011, after his government began secret talks with the FARC.

After formal talks with the rebels opened in Cuba in November 2012, Santos repeatedly offered to meet his predecessor, but no sit-down materialized.

The Colombia conflict has killed more than 260,000 people and left 45,000 missing over half a century, drawing in several leftist guerrilla groups, right-wing paramilitaries and drug gangs.

The FARC, the oldest and largest rebel group, was set to relaunch as a political party under the peace deal.