U.N. Chief: Colombia Peace Bid 'Too Far to Turn Back' after Nobel 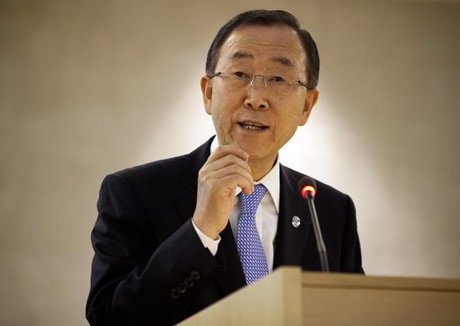 U.N. chief Ban Ki-moon hailed the awarding of the Nobel Peace Prize to Colombian President Juan Manuel Santos on Friday, saying it shows the country has come "too far to turn back now."

The decision comes "at a critical moment when this special acknowledgement provides needed hope and encouragement to the Colombian people," the United Nations secretary general said about Santos's efforts to bring the country's half-century-long civil war with the FARC rebels to an end, despite voters' rejection of a historic peace deal.

Ban called the award "a timely message to all who have toiled so hard for peace -- to the government of Colombia, to the Revolutionary Armed Forces of Colombia -- People's Army (FARC-EP)," and to other political and social forces who have expressed a desire to end the conflict.

"The peace process should inspire our world," he said.

The leader of Colombia's FARC rebels, Timoleon Jimenez, was notably not named a co-recipient of the Nobel.

The Colombian deal, signed on September 26 after nearly four years of talks, was widely expected to be ratified following an October 2 referendum before voters shot down the agreement, leaving the country teetering between war and peace.