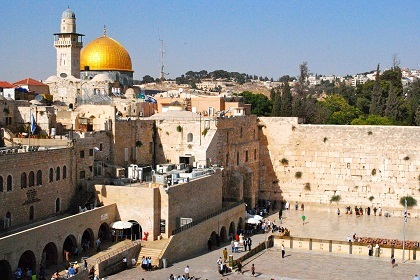 The U.N. cultural agency on Tuesday adopted a controversial Arab-sponsored resolution on east Jerusalem which Israel has said ignores Jewish ties to a key holy site.

A spokesman for Paris-based UNESCO said the resolution, which has caused Israel to suspend its cooperation with the agency, was adopted without a new vote after being approved at the committee stage last week.

The text, which touches on Israel's management of Palestinian religious sites, has infuriated Israel by referring throughout to the al-Aqsa mosque compound in east Jerusalem's Old City -- Islam's third holiest site -- only by its Muslim names: al-Aqsa and al-Haram al-Sharif.

The site is also revered by Jews as the Temple Mount which housed the First and Second Temples.

Palestine's deputy ambassador to UNESCO, Mounir Anastas, told reporters the resolution "reminds Israel that they are the occupying power in east Jerusalem and it asks them to stop all their violations," including archaeological excavations around religious sites.

It is the second time this year that UNESCO has been the arena of tensions between Israel and Arab countries.

In April, the organization passed a resolution condemning "Israeli aggressions and illegal measures against the freedom of worship and Muslims' access to the al-Aqsa Mosque."

So if Judaism has no connection to Jerusalem, then the whole Bible, both Old and New Testaments are lies. Therefore Jesus, being a Jew, couldn't have walked in the streets of Jerusalem, so all Christianity is based on a lie.
If Mohammed rode to Heaven on Buraq from there, what exactly existed on that site?
It's about time Christianity woke up and realised that all their beliefs are also being denied by countries whose religion dictates it to lie in order to try
and delegitimise Judaism (therefore Christianity) and the State of Israel.