Aoun: There are No Bilateral Agreements and No One Will be Excluded 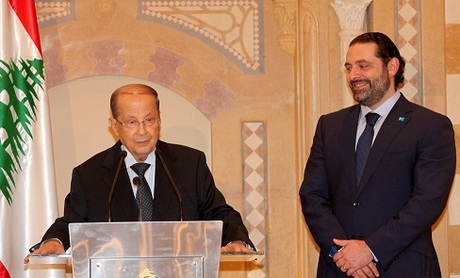 Free Patriotic Movement founder MP Michel Aoun reassured Thursday that there will be no “bilateral, tripartite or four-party agreements” and that “no one will be excluded” should he be elected president, shortly after his nomination was formally endorsed by ex-PM Saad Hariri.

“We are visiting ex-PM Hariri today to thank him for endorsing our presidential nomination. We have made pledges to each other to secure the success of the mission and help Lebanon resolve its crisis and we hope to restore Lebanon's security and stability and revive it economically,” said Aoun after meeting Hariri at the Center House.

“There will not be bilateral, tripartite or four-party agreements but rather a single agreement on running the country's affairs... and whoever tries to eliminate a certain sect would be trying to eliminate Lebanon,” the FPM founder added.

“No one loses through dialogue. Everyone would win and Lebanon would win,” Aoun reassured.

“We are confident that those who are opposing now are basing their opposition on prior misconceptions. No one will be excluded and we will not deal with anyone maliciously,” the FPM founder emphasized.

“We call on everyone to cooperate with us and to await our performance which will show our true intentions,” Aoun added, stressing that “rumors cannot build a country.”

He sounds so sane, sort of like Trump during his first 30 minutes of a debate, but the craziness is still in there waiting to come out. On guard, Saad!!

Thought you would have blown your brains by now. Oh well. It'll be fun to see your friends and you squirm as Lebanon rises with Aoun.