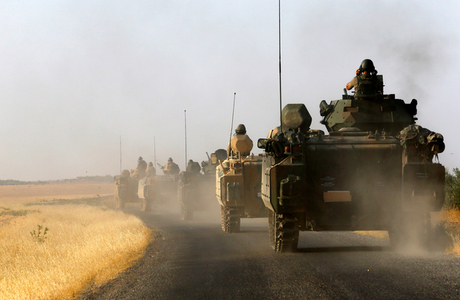 Rockets struck 70 People's Protection Units (YPG) targets Friday, the armed forces said in a statement, but did not say if any militia fighters were killed.

Turkey views the YPG and Kurdish Democratic Union Party (PYD) as terror groups linked to the outlawed Kurdistan Workers' Party, staging an insurgency in Turkey since 1984.

The PKK is proscribed as a terrorist organisation by the United States and European Union.

Late Wednesday, Turkish jets struck YPG positions and the armed forces claimed they killed up to 200 YPG fighters but the Syrian Observatory for Human Rights put the toll lower.

The monitor said at least 11 fighters from the Syrian Democratic Forces (SDF) -- a US-backed alliance of about 30,000 Kurdish and Arab fighters -- were killed and 24 wounded.

Turkey has clashed with the US over the YPG, with the Americans' support to the Syrian Kurdish militia causing friction between the two NATO allies.

Despite Ankara's protests, Washington believes the YPG is the most effective fighting force against the Islamic State group in Syria.

"Unfortunately their use by the United States against Daesh (IS) and being supplied with arms is a big mistake. We have made it clear to them," he said.

The strikes were part of Ankara's operation in northern Syria, launched on August 24 to remove IS from its border and stop the westward advance of the YPG.

Turkey has sent dozens of tanks and hundreds of troops into Syria to support rebels and the army says 1,265 square kilometres (488 square miles) has been secured since August.

Turkish President Recep Tayyip Erdogan has repeatedly voiced its opposition to a "terror corridor" -- referring to the joining of the Kurdish "cantons" of Afrin and Kobane -- which it says it will prevent.

In the latest strikes, the armed forces said it also hit 52 IS targets in northern Syria while the Dogan news agency said seven Ankara-backed rebels were killed in clashes with IS.