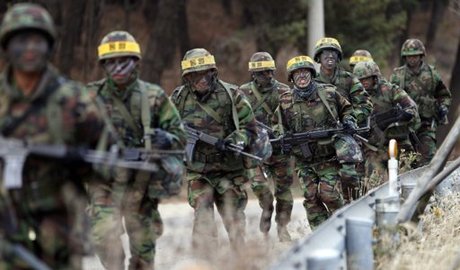 South Korea's defense chief said Thursday that North Korea may use provocations next year to deal with economic woes and political instability stemming from a second dynastic succession.

Defense Minister Kim Kwan-Jin described 2012 as a critical year for security saying the military should stay alert against any provocations by North Korea.

The regime has set the goal of becoming a "great, powerful and prosperous" country by 2012, Kim said.

It also faces "economic hardships, public discontent and political instability" next year as the third-generation hereditary succession is under way, Kim added.

"To address these issues and find a breakthrough, North Korea may again resort to provocations," he told a meeting of key military commanders.

North Korean leader Kim Jong-Il, 69, is believed to have speeded up the succession plan after suffering a stroke in August 2008.

In September last year he gave his youngest son Jong-Un senior party posts and appointed him a four-star general, in the clearest sign yet that he is the heir apparent.

The North suffers severe economic problems, exacerbated by sanctions, and persistent serious food shortages. It is also under international pressure to shut down its nuclear weapons program.

"In these extremely difficult times, our military should stay focused on our missions. As in the past, our enemy could catch us by surprise when we appear vulnerable," the minister said.

Relations have been tense since Seoul accused its neighbor of torpedoing a South Korean warship in March 2010 near the Yellow Sea border, with the loss of 46 lives.

The North denied sinking the ship, but South Korea has since staged a series of military drills alone or jointly with U.S. troops.