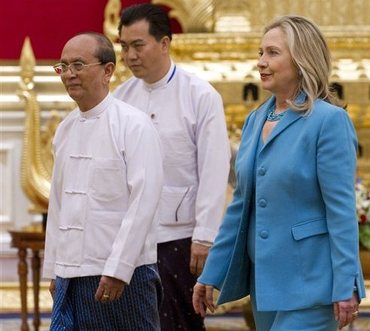 U.S. Secretary of State Hillary Clinton won promises of further reforms from Myanmar's rulers in historic talks Thursday, but said it was too soon to end sanctions after decades of repression.

Paying the most senior U.S. visit in more than half a century to a nation long distrustful of the West, Clinton offered only cautious incentives to encourage more action, despite a call by China for Western sanctions to be lifted.

Clinton said Myanmar's leaders "assured me that progress would continue and broaden" and she welcomed the removal of restrictions on democracy icon Aung San Suu Kyi, whom she will meet later Thursday in the commercial hub Yangon.

"We're not at the point yet that we can consider lifting sanctions that we have in place due to our ongoing concerns over policies that have to be reversed," she said after talks with President Thein Sein, a former general.

"But any steps that the government takes will be carefully considered and ... will be matched because we want to see political and economic reform take hold," she told reporters in Myanmar's isolated showcase capital Naypyidaw.

Thein Sein, who took charge in March after Myanmar nominally ended decades of military rule, himself hailed a "new chapter in relations" as he met Clinton at his imposing palace decked out with chandeliers and gold-leaf chairs.

Clinton's delicate Myanmar trip is a test-case for President Barack Obama's policy of engaging U.S. adversaries. Upon taking office, Obama promised to reach out to all who "unclench their fists" but regimes such as Iran and Syria have instead led deadly crackdowns on the opposition.

Obama personally announced Clinton's visit during a trip last month to Indonesia, part of his administration's renewed focus on Asia amid concerns in much of the region about an assertive China.

She announced few immediate steps by the United States, where laws set by Congress maintain a sweeping ban on trade with Myanmar and require Washington to block international assistance to one of the world's poorest nations.

Clinton said the United States would open talks with Myanmar to start joint searches for the remains of troops killed in World War II, when the strategically placed country was a major battleground.

Clinton also invited Myanmar to join as an observer the Lower Mekong Initiative, a U.S. program that offers cooperation on health and the environment in Southeast Asian nations.

"These are incremental steps and we are prepared to go further if reforms maintain momentum. In that spirit, we are discussing what it will take to upgrade diplomatic relations and exchange ambassadors," Clinton told reporters.

"Over time, this could become an important channel to air concerns, monitor and support progress and build trust on both sides," she said.

The United States has been represented by a lower-ranking diplomat, a charge d'affaires, as a protest since Myanmar's military rulers refused to accept the results of 1990 elections swept by Suu Kyi's forces.

The opposition leader holds sway in Washington -- where Myanmar exile groups keep up a vocal lobbying campaign against the military-backed government -- and any easing of U.S. sanctions on Myanmar would almost certainly need her approval.

Clinton will meet twice with Suu Kyi -- first for dinner Thursday and then for more formal talks on Friday morning.

Suu Kyi's opposition, which boycotted last year's poll, plans to contest by-elections next year that will be a major test of the new political climate.

Clinton also welcomed what she said were efforts by the regime to resolve ethnic conflicts in the country formerly known as Burma, which has been torn by decades of intractable insurgencies.

"But as long as the terrible violence continues in some of the world's longest-running internal conflicts, it will be difficult to begin a new chapter," she said.

The top U.S. diplomat also called on Myanmar to cut "illicit ties" with nuclear-armed North Korea and said the regime had given assurances that it was not cooperating with Pyongyang.

"I was frank that better relations with the United States will only be possible if the entire government respects the international consensus against the spread of nuclear weapons," she said.

Her aides have, however, played down defectors' accounts of nuclear cooperation between the two authoritarian countries, saying the top U.S. concern relates to missile technology.