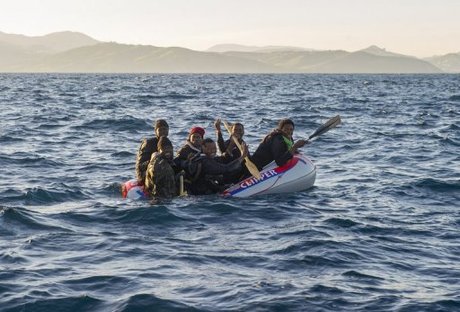 At least 110 people are feared to have drowned off Libya when a migrant boat capsized, and more may have died in another stricken vessel, the U.N.'s refugee agency said Thursday, citing survivor testimonies.

"A vessel with around 140 people on board overturned Wednesday just a few hours after setting off from Libya, throwing everyone into the water. Only 29 people survived," UNHCR spokesperson Carlotta Sami told AFP.

The Norwegian vessel Siem Pilot was first on the scene, around 20 nautical miles off Libya, and rescued the survivors -- all of whom were in poor condition after spending hours in the water -- and recovered 12 bodies.

Those pulled to safety were transferred to the island of Lampedusa by the Italian coast guard.

In what could be a second incident, which could not be immediately confirmed by the coast guard, two women told the U.N. agency they believed they were the only survivors in an disaster in which some 125 people drowned.

"They told us they were on a faulty dinghy which began to sank as soon as they set sail. They were the only survivors," Sami said.

The International Organization for Migration (IOM) quoted the same survivors, putting the death toll for both wrecks at 240 people.

"Not enough has been done so far to avoid these tragedies," said Flavio di Giacomo, IOM spokesman in Italy.

The Italian coast guard said it had no information on the second reported rescue on Wednesday or the saving of two women.

One of the 29 survivors had suffered severe burns after sitting in fuel and was transferred by helicopter to hospital in Palermo along with an other who suffered from epilepsy.

Over 4,000 migrants have died or are missing feared drowned after attempting the perilous Mediterranean crossing this year.

The rescue situation is often chaotic, with people confused, sick or exhausted after periods in crisis-hit Libya unable to specify how many people were on board their dinghies at the outset or what vessel pulled them from the water.

At least two rescue missions were underway off Libya on Thursday, with close to 180 people pulled to safety according to an AFP photographer aboard the Topaz Responder, run by the Malta-based MOAS (Migrant Offshore Aid Station).

"Before dawn, we saw a migrant dinghy, lit up by the Responder's search light," photographer Andreas Solaro said, adding that 31 people, 28 men and three women, one of them elderly, were rescued.

In the second rescue, 147 people from Eritrea, Ghana, Sudan, Mali and Sierra Leone were pulled to safety, including 20 women, though only after some had fallen into the sea.

"The (Responder) crew was shouting at them to sit down and stay calm while the lifejackets were handed out but they were getting agitated, and around 10 of them fell overboard, some without lifejackets on," Solaro said.

All were pulled to safety.

October marked a record monthly high in the number of migrants arriving in Italy in recent years -- some 27,000 people -- and the departures have showed no sign of slowing, despite worsening weather in the Mediterranean.

Amnesty International warned Thursday the pressure placed on Italy by Europe to cope alone with the worst migration crisis since World War II had led to "unlawful expulsions and ill-treatment which in some cases may amount to torture."

The report was bluntly rejected by Italy's chief of police, who denied the use of violent methods in the force's handling of migrants.