Report: Berri Says Geagea wants to Keep Kataeb and Marada Out of Cabinet 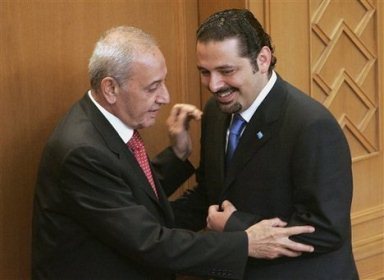 The daily said that Geagea is trying to limit the Christian representation in the new cabinet to his LF ministers.

Berri has advised Hariri to seek to pick ministers from both the Kataeb and Matrad as he expressed willingness to facilaite any obstacles that might hamper this step, according to al-Akhbar.

Hariri began his consultations on Friday with the parliamentarians to form the new cabinet after being nominated to the post by 112 out of 126 members of parliament. The consultations will continue on Saturday.

Hariri met with several blocs on Friday including the Lebanese Forces.

The LF bloc MP George Adwan said after the meeting that his bloc demanded “a sovereign ministerial portfolio, a services-related portfolio and a mid-caliber portfolio.”

“We want a government in which all parties would abide by its decisions without boycotting or obstruction. Those who want to practice obstruction or opposition are free to stay outside Cabinet,” Adwan added.

Hariri's key support had contributed to the election of Free Patriotic Movement founder and ex-army chief Michel Aoun as Lebanon's 13th president on Monday, which ended around two and a half years of presidential and political vacuum.

In which other democracies does governments include all political parties with huge differences of opinions? Whats the point in going to the ballots if all parties are included in the final government line-up anyway, making the government weak and impotent?

That request hs been M8 priority for at least the last 10 years. They lost in the elections and yet they demanded a national unity government. Salam government was paralyzed as a result of having opposites in the same government.

Lebanese politics are unique and disgusting.