40 Years after His Father, Canada PM Trudeau Travels to Cuba 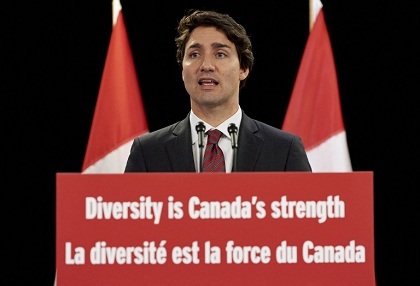 The prime minister's official visit comes 40 years after his father Pierre Elliott Trudeau committed to a lifelong friendship with Fidel Castro during a three-day trip to the Caribbean island.

According to his office, the goal is to "renew and strengthen" the bilateral relationship.

It is also possible to rile Washington.

Trump has sent mixed messages about the thaw in U.S.-Cuba relations which was started two years ago by his predecessor.

He gave it a lukewarm welcome at first saying "50 years is enough," before vowing to reverse the new policies unless Cuban President Raul Castro agrees to democratic reforms and other demands.

While observers note that Cuba will probably not be a priority for Trump, it remains unclear how he would view a Trudeau-Castro photo opportunity.

The visit is primarily "symbolic," John Kirk, a politics professor and Cuba expert at Dalhousie University in Halifax, told AFP.

Canada, he noted, is the only country in the Americas, along with Mexico, to have maintained diplomatic ties with Havana after the revolution, "despite significant pressure from Washington" over the years.

Ottawa also remained steadfastly opposed to the American embargo, which remains in place due to the U.S. Congress' rejection of Obama's signature Cuba rapprochement.

During a 30-hour stopover en route to Peru for an Asia Pacific Economic Cooperation (APEC) leader's meeting, Trudeau is to meet with Raul Castro, who succeeded his ailing brother Fidel in 2008.

Officially, no meeting is planned with Fidel Castro, but "there's a chance" they will see each other, Cuba's ambassador to Canada, Julio Garmendia Pena, told Canadian media.

Kirk said the journey is a personal one for Trudeau who is retracing his father's footsteps, as well as a reminder to Washington of Canada's support for ending Cuba's isolation.

The Cuba visit will be the first by a Canadian leader since Jean Chretien in 1998.

Over the past decade, bilateral ties reached a historic low with former Conservative prime minister Stephen Harper often siding with Washington in seeking to isolate Cuba on the international scene.

Yet it was also Harper who hosted secret talks between American and Cuban officials in 2014 aimed at ending half a century of discord.

Pierre Elliott Trudeau became in 1976 the first leader of a NATO country to break with allies and meet with Castro during the "Cold War," against Washington's expressed wishes.

Photos from the era show Fidel Castro in his trademark olive-green revolutionary uniform, holding in his arms Justin Trudeau's baby brother Michel, who died in an avalanche in 1998.

Decades later, Fidel Castro would be an honorary pallbearer at the funeral for Pierre Elliott Trudeau in Montreal.

Today, Cuba continues to welcome a huge influx of Canadian vacationers each year (1.3 million or nearly 40 percent of all Cuba tourists), but bilateral trade remains modest at less than US$1 billion annually.

Despite their warm diplomatic ties, many Canadian companies do not invest in Cuba over fear they will be blocked from the U.S. market as a result.