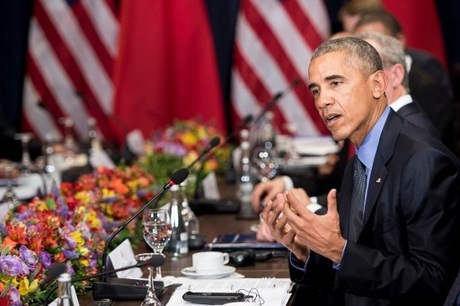 With Donald Trump's election sparking questions about the respect for democratic norms at home, U.S. President Barack Obama made a strident case for democracy Saturday and urged world leaders to give his successor a chance.

With China and Russia seen as major global beneficiaries of Trump's election victory, Obama acknowledged that questions were being raised about the post-Cold War primacy of democracy.

"After a decade in which we have seen more and more countries adopt democratic practices, you are now starting to see some of those gains reversed," Obama said.

But, he added, governments that stifle opposition, do not expect the rule of law or an independent judiciary, are destined to fail.

"Over time, those governments fail and those economies fail," he said, while admitting that "democracy can be frustrating."

Obama is in Peru for a summit of Asia-Pacific leaders, his last stop on his last foreign trip.

He faces a barrage of questions about Trump, whose campaign promises threaten to upend decades-long U.S. commitments to NATO and defense obligations in Asia.

Trump has also opposed a 12-nation Pacific trade deal and backed by key allies like Japan.

"The United States is such a big country that after any election people are uncertain," Obama said.

"It will be important for everybody around the world to not make immediate judgments but to give this president elect a chance."

"With respect to Latin American, I don’t anticipate major changes in policy from the new administration," he said, echoing his administration's position that Trump's election has not fundamental altered U.S. interests.

"How you campaign isn't always the same as how you govern," he said.