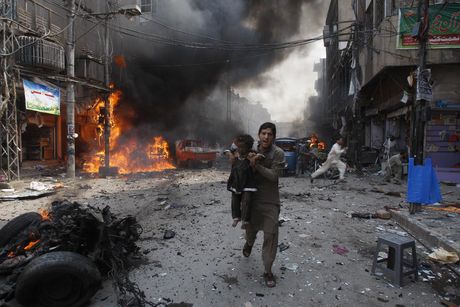 A bomb which targeted a paramilitary truck on a crowded city street killed three security personnel Tuesday in Pakistan's troubled northwest, where levels of militant violence had recently dropped.

Police said another five paramilitaries were wounded in the attack, which happened when a Frontier Corps truck was travelling through a congested neighbourhood in the Khyber Pakhtunkhwa provincial capital of Peshawar.

"The IED (improvised explosive device) was planted along the roadside and exploded as the FC truck passed by," Mohammad Sajjad Khan, a senior police official in Peshawar, told AFP.

Zulfiqar Babakhel, a spokesman for the city's main hospital, confirmed the death toll and said two of the wounded were critically injured.

No group has claimed responsibility for the attack.

Overall levels of militant-linked violence have fallen since the Pakistan army launched an operation in 2014 to wipe out militant bases in the tribal districts and end an insurgency that has cost thousands of civilian lives since 2004.

But militant groups are still able to carry out periodic bloody attacks, particularly in the northwest.