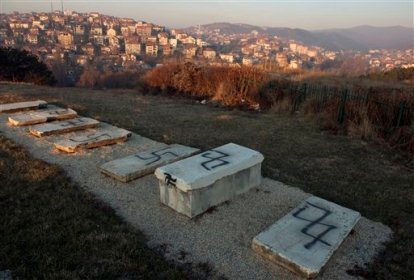 The Organization for Security and Cooperation in Europe late Friday condemned the "disgraceful" desecration of an abandoned Jewish cemetery in Pristina where graves were daubed with Nazi graffiti.

"As the leading international human rights organization in Kosovo, the OSCE wholeheartedly condemns this disgraceful act," the acting head of the OSCE mission in Kosovo, Edward Joseph, said in a statement.

"To damage or desecrate the graveyard of any community is a contemptible insult and expression of hate," he said, adding: "To do so in this manner, towards a community whose members were hunted down for extermination within living memory, is an obscenity."

The abandoned graveyard in a Pristina suburb was targeted by vandals on Tuesday and Wednesday, with graffiti sprayed on the graves reading "Jud Raus" (Jews Out) in faulty German, along with swastikas.

The OSCE hailed the "swift condemnation" of the incident by the Kosovo government and called for the perpetrators to be brought to justice and the offending graffiti to be removed.

Only a few Jewish families remain in Kosovo from the some 300 families who lived in the territory before World War II.

The Jewish cemetery was restored earlier this year with the help of students from the United States. Most of the graves date from the late 19th century.

Based in Vienna, the OSCE's mission in Kosovo is its largest field operation, aimed at democracy-building and promoting human rights and the rule of law.