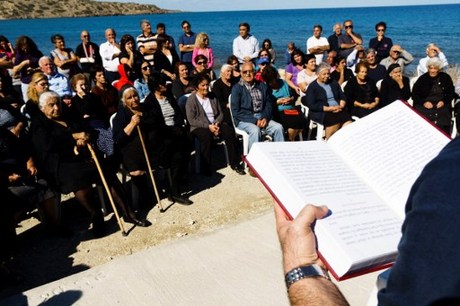 In a village in northern Cyprus, a community struggling to save its ancient language has seen a glimmer of hope in intensified efforts to reunify the divided island.

Kormakitis was once the hub of Cyprus' Maronite minority, descendants of Lebanese and Syrian Christians who spoke Sanna, a unique dialect of Arabic influenced by the Aramaic spoken by Jesus.

The language is now severely endangered, according to UNESCO.

Uprooted by the 1974 Turkish invasion of Cyprus, many Maronites assimilated into Greek Cypriot communities where they sought shelter.

They have seen fresh hope in recent months as the Greek and Turkish Cypriot leaders intensified their efforts to reunite the island.

Talks in Switzerland ended on November 21 with no breakthrough, but the leaders have since agreed to resume negotiations and are due to meet again in Geneva in January.

The Maronites hope a deal could eventually encourage the community to return to live in northern Cyprus.

That could help revive Sanna, which is in decline despite years of classes, the efforts of NGOs and an annual summer school in the village.

"The problem is that because we have lost our village it's very difficult to keep our language," teacher Katy Foradari said, taking a break from teaching Sanna under the vaulted ceiling of an 18th century church in Kormakitis.

Able to visit and stay in the village despite living outside the Turkish-controlled part of the island, young Maronites have attended Sanna classes at a summer camp there every August since 2008.

In sunbaked sandstone chapels and whitewashed bungalows around the small main square, around 100 children aged five to 17 took part in this year's camp.

They learned basics from the alphabet -- codified for the first time only a few years ago -- to songs, vocabulary and grammar.

Making up less than one percent of the island's population, Maronites are a branch of the Catholic church and have been in Cyprus since the eighth century.

Like many of the volunteers at the school, Foradari grew up in Kormakitis, the largest of the island's four Maronite villages and the last where Sanna was spoken.

But when she was 16, Turkey occupied the northern third of Cyprus after an Athens-backed coup in the capital Nicosia.

She and most of the community fled to the south, leaving their homes behind.

They established Maronite churches in their new communities, with parts of services still given in the ancient Semitic language of Syriac  -- like their more numerous counterparts in Syria and Lebanon.

But Sanna did not weather the displacement well.

Because Maronite children do not go to school in Kormakitis, "we have started losing our language," Foradari said. "We are used to speaking Greek."

A few hundred, mostly elderly, residents remained in the village after 1974, using Sanna in their daily life and helping out with the summer camp.

But of nearly 5,000 Maronites living across the island today, only around 1,000 speak Sanna.

Some of them see the peace talks as the best hope in years for reviving their language.

For Yiannakis Mousas, the community's representative to the parliament, only a solution to the Cyprus dispute can save Sanna.

"Only through the return of the Maronite people, of their property, of their schools, of their churches, only in this way do we have a good chance to revive the language," he told AFP.

Since 1974, Mousas and many other Maronites have been based in Nicosia, the island's divided capital.

They have a modern church and a small social club named after Kormakitis, where they sip coffee a few hundred yards from the U.N. buffer zone that splits the old town.

Mousas said reunifying the island would encourage young Maronites to move to their villages, where they would hear Sanna spoken daily, encouraging them to adopt it again.

"Once the Maronites are resettled to their villages, there will be a new beginning," he said.

But the latest talks produced no concrete results, and the memory of previous, failed negotiations looms over ongoing efforts to reach a solution.

The community is teaching Sanna as usual, with classes at Nicosia's Maronite primary school and more summer camps planned.

"We have to create projects like this camp where we combine learning the language with entertainment," said Antonis Skoullos, an IT expert in his 40s who helps organize the Kormakitis language school.

He recognized the need to make Sanna appealing to young people who had no memory of living in Kormakitis.

But nostalgic for the village he fled as a young boy, he admitted his motivation to revive the language was more personal than practical.

"Behind this language are my memories and my feelings," he said.

I wonder whether anyone even considered themselves "Lebanese" when their ancestors left Lebanon in the Middle Ages.