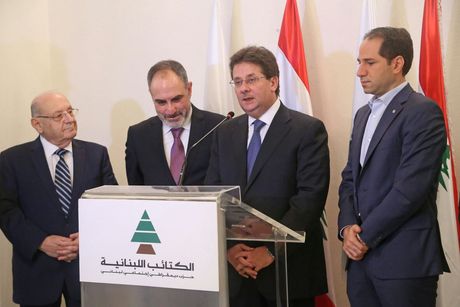 As part of an initiative launched by the Change and Reform bloc to separate the cabinet formation process from an agreement on a new electoral law, a delegation of the bloc visited the Kataeb party on Tuesday and talks focused on devising a law for the upcoming parliamentary elections, the National News Agency reported.

“We are working on clinching an agreement over the coming stage and we will reach a formula in the nearest time possible. We refuse to return to the 1960 law after all the efforts we have made,” Kanaan told reporters following the meeting.

For his part, Gemayel maintained that there was a serious intention to endorse a new election law, he said: “This is a big test for the new tenure, the President, and the Prime Minister (designate). The election law is the true guarantee of correct representation.”

“We are ready to cooperate with the Free Patriotic Movement. Each political party must work with us to approve an election law before the polls. We will be positive till the end,” said Gemayel.

On Monday, the bloc held separate meetings with Lebanese Forces chief Samir Geagea and Hizbullah's Loyalty to Resistance bloc as part of a tour with various political parties.

Kanaan had stressed that the tour will include “Mustaqbal, the Progressive Socialist Party, the Syrian Social Nationalist Party and others in order to create a political momentum that can be employed to push for the approval of a law that ensures partnership, democracy and correct representation.”

Lebanon's political parties are bickering over amending the current election law which divides seats among the different religious sects.

are they ever gonna hold talks on how to improve lebanese economy and social welfare of people? or are they only interested in securing their seats above all things?