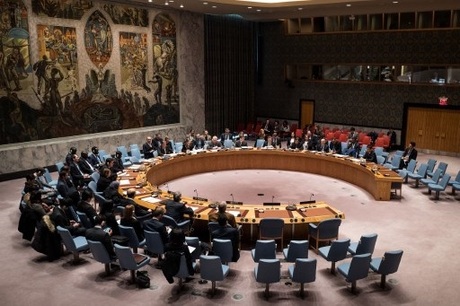 The U.N. Security Council on Friday rejected a U.S.-drafted resolution on imposing an arms embargo and sanctions on South Sudan, now in its fourth year of war.

The measure garnered only seven votes in favor in the 15-member council, while eight countries including Russia, China and Japan abstained.

Nine votes and no veto are required for resolutions to be adopted in the council.

The United States, backed by Britain and France, had argued that cutting off the arms flow was urgently needed following U.N. warnings of a risk of mass atrocities.

But Russia, China, Japan, Malaysia, Venezuela and more importantly the three African council members -- Angola, Egypt and Senegal -- were not swayed and they all abstained.

"This should not have been a contentious resolution," U.S. Ambassador Samantha Power told the council after the vote.

"History is going to be a very harsh judge of their decision," said Power, arguing that those who declined to support the measure offered no alternative course to try to end the bloodshed.

The outcome of vote was a setback for the United States, which helped South Sudan gain independence in 2011 but has been unable to steer the country away from a war that erupted two years later.

Aside from the arms embargo, the United States had sought to put rebel leader Reik Machar, army chief Paul Malong and Information Minister Michael Makuei on a sanctions blacklist, subjecting them to an assets freeze and a global travel ban.

Japan, which has some 350 troops serving in the U.N. mission in South Sudan, had warned that the measure would have antagonized President Salva Kiir's government and put peacekeepers' lives at risk.

Opponents of the sanctions pointed to Kiir's call earlier this month for a national dialogue to restore peace, saying that initiative must be given a chance.