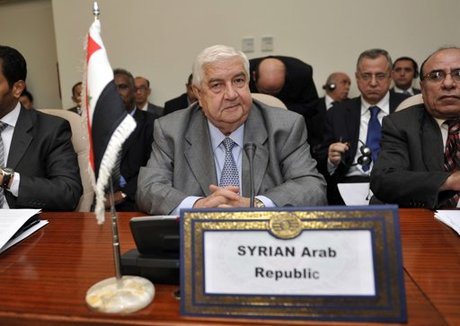 Syria said Monday it will accept observers as part of an Arab League plan to end deadly unrest if its conditions are met, in a last-ditch bid to stave off crippling sanctions.

"The Syrian government responded positively to the signing of the protocol" on the dispatch of observers "based on the Syrian understanding of this cooperation," foreign ministry spokesman Jihad Maqdesi told reporters.

Foreign Minister Walid Muallem had sent a message to the Arab League to that effect on Sunday night, as an Arab League deadline was set to expire, paving the way for the signing of the protocol.

“By signing the draft protocol, the Syrian government considers all resolutions issued by the Arab League with the absence of Syria to be null and void, including the suspension of its membership and the sanctions imposed on it,” Muallem told Arab League chief Nabil al-Arabi in the letter published by Syria’s official news agency SANA.

“The Syrian government would like to sign the draft protocol in Damascus based on the Arab work plan agreed upon in Doha on October 30, 2011, and the inquiries and clarifications which Syria asked the AL Secretary-General to present, in addition to the positions and observations made by Algeria and statements of head of the Ministerial Committee and al-Arabi on the rejection of foreign interference in Syrian affairs,” Muallem says in his letter.

Muallem’s letter also calls on the League’s General Secretariat to inform U.N. chief Ban Ki-moon of the “the positive results to be reached after the signing of the protocol and ask him to distribute the message to the head and members of the U.N. Security Council as an official document,” SANA reported.

The top Syrian diplomat stressed in his letter that “the good will of all Arab countries including the committee members and Syria, a founding member of the AL, will play an important and effective role in coordinating between the two sides to perform this task.”

He added that this will “positively reflect on the joint Arab action.”

Arabi told reporters that Muallem had sent him a letter agreeing to sign off on the monitors "but with conditions and demands."

"We've contacted Arab foreign ministers and they have been apprised of the Syrian letter," he said.

Damascus had until now refused to sign the protocol, arguing that the text contained wording that undermined Syrian sovereignty.

The international community wants monitors to be deployed in Syria to keep a check on forces of Syrian President Bashar al-Assad who have been accused by the United Nations of rights abuses.

The U.N. estimates that at least 4,000 people have been killed since March in Syria, where regime forces have violently suppressed a popular revolt against Assad's government.

At least another 63 people were killed in violence across the country at the weekend, said human rights activists, who also reported five more deaths on Monday in the flashpoint region of Homs.

Syria has asked in its message to the Arab League for "minor changes which do not touch on the substance of the protocol and for clarifications that are not linked to the nature of the mission," Maqdesi said.

"We asked them for the names and nationalities of the observers" he said.

"We hope for a positive reply," Maqdesi added. "The success of this mission depends on Arab intentions."

Syria insists on the terms of Article 8 of the Arab League's charter which stipulates that member states must respect the systems of government in other member states and avoid any action to change them, Maqdesi said.

Last month Syria was suspended from the 22-member Arab bloc amid mounting calls from world leaders for Assad to quit for failing to halt the bloodshed in his country.

The deployment of an observer mission is part of the League's proposal to end the violence in Syria, which is raging on despite offers of political reforms by Assad.

Sunday's deadline was announced in Doha by Qatari Prime Minister Sheikh Hamad bin Jassem al-Thani, who also warned against the internationalization of the Syrian crisis if Damascus did not heed the Arab call.

"As Arabs we fear that if the situation continues things will get out of Arab control," Sheikh Hamad said.

His comments came after an Arab League ministerial panel on Saturday imposed fresh sanctions on Syria, following an initial wave of sweeping measures against the Assad regime adopted on November 27.

The sanctions voted last month included an immediate freeze on transactions with Damascus and its central bank and of Syrian regime assets in Arab countries.

On Saturday in Doha, the Arab panel put 19 Syrian officials on a blacklist banning them from travel to Arab countries and saying their assets would be frozen by those states.

The panel also called for an embargo on the sale of Arab arms to Syria and cut by half the number of Arab flights into and out of Syria -- including its national carrier Syrian Air -- with effect from December 15.

Syria has already been hit by a raft of EU and U.S. sanctions and last Friday the U.N. Human Rights Council passed a resolution "strongly condemning the continued widespread, systematic and gross violations of human rights and fundamental freedoms by the Syrian authorities."

Damascus -- which accuses "armed terrorist groups" of fuelling the unrest -- rejected the resolution as "unjust" and said it was "prepared in advance by parties hostile to Syria."

Iraq said it is opposed to sanctions on Syria, a dominant trading partner, while Jordan said on Monday it does not want to impose trade sanctions and a flight ban on Damascus because they will harm Jordanian interests.

if true, then game over syrian regime

i dont think the bedouins are able to solve any problem.

This is an attempt at more delaying tactics and BS from ASSad. He won't comply.

Come on, today we accept the observers and nullified the sanctions and the previous punishments of the 4000 dead, tomorrow the terrorist regime will object on the dress code of the observers, how long can someone just be so naive to believe a regime that all they understand is killing and hitting, assassination.
Reject any request from the Syrian regime as they are fault for 9 months for not allowing free media to enter and take pictures of what's happening. Take the maximum punitive measure now before it is too late and another 8000 are dead.

And if not true, then still game over syrian regime. Right geha? ya la6if shu zaki

Mualem, you are in no position to set conditions. This is no news, nothing will change, the Arab league will reject the conditions.

Gabby, what delay are you talking about? You are the one to blame because you gave ASSad a grace period. How dare you act this way? You promised us 5 months ago that ASSad and his regime have 3 more months and they will be gone. Why did you extend the grace period? Don't you know ASSad and his tricks? I demand an explanation from you not just a thumbs down. You must face the music now. YOU MUST!

I thought that Muallem...
1- Did not care about the sanctions ...
2- Called observers spies...