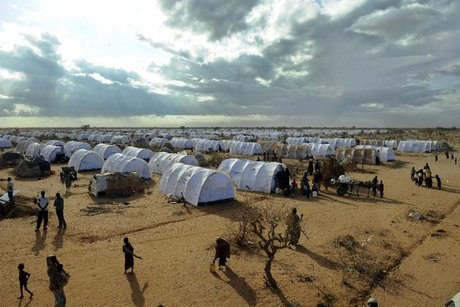 A policeman was killed and three people wounded in an explosion in Dadaab refugee camp Monday, the latest in a spate of grenade and landmine attacks in Kenya's border regions with Somalia.

"One person has been killed in the explosion, three injured," said Kenya Red Cross spokesperson Nelly Muluka, adding that the blast was in the Ifo II section of Dadaab, the world’s largest refugee camp complex.

"It is yet to be known if it was a landmine or a grenade that was hurled at the car," said a police officer, speaking on condition of anonymity. "A policeman has been killed and the others have been injured."

Kenyan officials blame Somali Islamist Shebab insurgents or their sympathizers for a series of recent shootings and bombings, although armed bandits also operate in the border areas.

Gunmen seized two Spaniards working for Medecins Sans Frontieres (Doctors Without Borders) from Dadaab in October and are thought to have taken them to Somalia.

The kidnapping of the Spaniards was one of the incidents that spurred Kenya to send troops into Somalia to fight the al-Qaida-linked Shebab in mid-October.

Regional armies are now pushing against Shebab positions in Somalia, with Kenyan forces in the south, Ugandan and Burundian African Union forces in Mogadishu, and Ethiopian troops in the west.