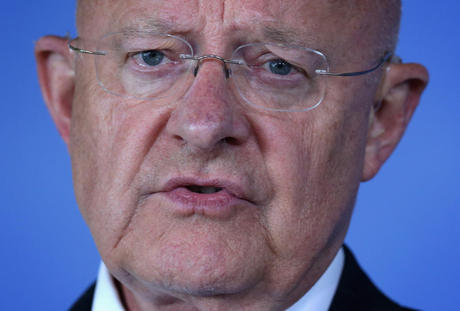 U.S. intelligence chief James Clapper has expressed "profound dismay" to Donald Trump over leaked details of a security briefing that reportedly contained explosive but unsubstantiated allegations about the president-elect.

Clapper said in a statement that he and Trump spoke late Wednesday about unverified claims that his aides colluded with the Kremlin to win the U.S. election, and that Russia has compromising information on Trump.

"This evening, I had the opportunity to speak with President-elect Donald Trump to discuss recent media reports about our briefing last Friday," Clapper said.

"I expressed my profound dismay at the leaks that have been appearing in the press, and we both agreed that they are extremely corrosive and damaging to our national security," he said.

American intelligence officials last week presented to Trump, as well as to President Barack Obama, a two-page synopsis of an outside researcher's report of a Russian dossier allegedly containing compromising material about the president-elect, according to CNN, The New York Times and other media.

In a tweet early Thursday, Trump wrote that "James Clapper called me yesterday to denounce the false and fictitious report that was illegally circulated. Made up, phony facts. Too bad!"

At a press conference Wednesday, the president-elect denied the explosive allegations contained in the report, and attacked the media for publicizing the unverified material while suggesting it had been leaked by the U.S. intelligence agencies.

But Clapper said he told the incoming US president that it is doubtful that the leak came from within the intelligence community.

"I emphasized that this document is not a U.S. intelligence community product and that I do not believe the leaks came from within the IC," Clapper said.

"The IC has not made any judgment that the information in this document is reliable, and we did not rely upon it in any way for our conclusions," he added.

Which leaks are we taking about the ones on BuzzFeed and CNN or the ones on the bed at the Russian hotel?